Check back later for further updates.

New South Wales is emerging as the favourite to host a proposed extra “magic” round of football in 2023, as the AFL works through ways to avoid it clashing with the Sydney Royal Easter Show.

In the initial proposal, the idea was for the “Magic Round”, which would see nine games played in Sydney on the same weekend, to be held from April 13-16 to coincide with school holidays. 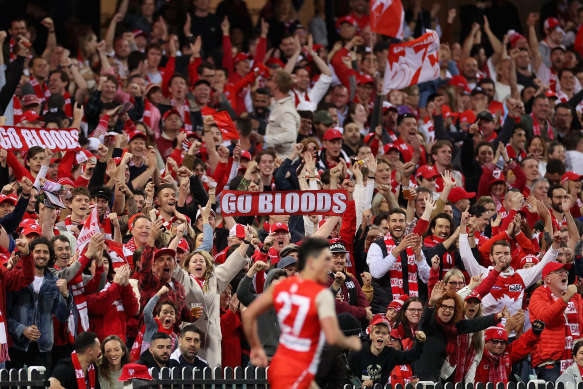 The atmosphere in the preliminary final at the SCG was electric.Credit:Getty Images

However, the Sydney Royal Easter Show attracts more than 800,000 people to the Sydney Showgrounds located at Sydney Olympic Park from April 3-17, adding some complexity to the idea.

The AFL is keen for the round to be a festival of Australian football in the non-traditional AFL state early in the season, with a particular emphasis on supporting Greater Western Sydney as they attempt to gain a stronger toehold in the city.

Under the proposal, all 18 clubs would play nine matches, with the Sydney Cricket Ground, Accor and Giants Stadiums likely venues for games including double-headers and potentially triple-headers, with the Giants’ home in the Showground precinct. The Giants did not attract more than 10,000 supporters to any of their games played at their home stadium in 2022.

The NRL’s popularity in western Sydney was boosted in 2022 when the Penrith Panthers and the Parramatta Eels played in the grand final.

The AFL received support from clubs to pursue the proposal and has been receiving bids from states outside Victoria. It would mean each team would play 23 games over 24 rounds in 2023.

With all teams in town and the stars of the game congregating at once, the game would receive unprecedented exposure in Sydney, with spectators to travel for the weekend from throughout Australia.

The AFL is also in the middle of negotiating a new joint collective bargaining agreement with the AFL Players Association, with sources saying a one-year rollover or a four-year deal are both being considered.

The extra round for premiership points would likely change the amount of lead-in games played in the pre-season.

Former high-profile Carlton midfielder Liam Stocker has revealed he almost retired as a 20-year-old due to an “aggressive” anxiety disorder. 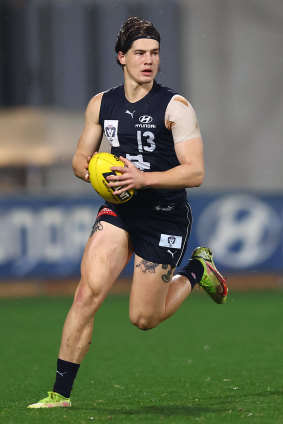 The 22-year-old’s stint with the Blues ended last month after he was delisted following 28 games across four seasons at Ikon Park.

Carlton famously swapped first-round picks with Adelaide to secure Stocker during the 2018 AFL draft, putting him immediately in the spotlight.

In a Beyond Blue initiative, Stocker revealed he has experienced severe anxiety for most of his life, but the issues were amplified in the AFL system.

“I had this weird assumption that the second I started earning money for being a professional athlete, and when I was surrounded by these elite performers, everything in my brain would just compartmentalise and disappear,” he told the Not Alone podcast. “The scrutiny and the expectation I put on myself, there were all these factors that just magnified what was going on in my head.

“I know it’s hard for people to conceptualise that you’re struggling with this aggressive anxiety disorder but you’re still in front of a packed MCG.”

Stocker left Carlton’s Queensland hub during 2020 after struggling in the unique environment the COVID-19 pandemic forced onto the AFL.

“I remember talking to our welfare manager at the time and just saying, ‘I think I’m going to pack it in here’,” he said.

“Basically things spiralled out of control and my plan was to retire and forget about football and disappear into the sunset and live happily ever after.

Stocker returned to play 17 AFL games in 2021 and six this year, but was not offered a new contract with the Blues.

His axing prompted former Carlton list boss Stephen Silvagni to question whether the Blues had done enough to help Stocker develop at the club.

Silvagni was the instigator in drafting Stocker in 2018, but departed from the club he is a legend at the end of the following year.

“I now realise my purpose in football might be a little bit bigger than just being good at it,” Stocker said.

“For me, it’s going to be destigmatising mental health, whether it’s in men’s health circles or in the AFL, but I’m going to do everything in my power to make people feel like suffering like this is OK.

“I know other people struggle, I know everyone does, and that’s what makes it OK for me.”