Sydney Roosters v Brisbane Broncos, 7.50pm Thursday, Sydney Cricket Ground
Fascinating clash to kick off the round – the Roosters are looking good for the finals but are by no means home and hosed with a rough draw, while the Broncos’ top-four hopes needed that upset loss to the Tigers like a hole in the head.

No Pat Carrigan for the Broncos ups Payne Haas’s workload, and I’m tipping Jared Waerea-Hargreaves and Matt Lodge will go hunting for him given both already play right on the edge of the aggro line and can well win themselves an advantage in the middle. There’s top quality match-ups all over the shop in this one – Sam Walker v Adam Reynolds, Kotoni Staggs v Joey Manu and four frequent flying wingers just to name a few. Roosters by 6.
Dan Walsh

Melbourne Storm v Gold Coast Titans, 6pm Friday, AAMI Park
The Storm are back home and looking to make a statement about their intentions for the finals when the bottom-placed Gold Coast Titans arrive at AAMI Park. Melbourne have much to work on after losing their four previous games before last round’s win in New Zealand and losing fullback Nick Meaney to injury has dealt their embattled outside backs yet another blow although loan signing David Nofoaluma is listed to make his Storm debut on the wing. The Titans have talent despite their lowly record led by forwards Tino Fa’asuamaleaui and David Fifita. If they can earn field position then the Storm’s inexperienced backs can be beaten as Canberra showed in their recent win in Melbourne. The Storm are strong favourites but if they lose, it would likely be the result that costs them a top-four finish with Brisbane and Parramatta close behind them. Storm by 10.
Roy Ward

Manly Sea Eagles v Parramatta Eels, 7.55pm Friday, 4 Pines Park
Manly’s season goes on the line in this one, and they know it. Expect the Sea Eagles to bounce back at home, especially with some of the players who stood down over the rainbow jersey drama to prove a point. Kieran Foran and Daly Cherry-Evans continue to be Manly’s best assets, and face an Eels side without their own chief playmaker Mitchell Moses. The Eels were excellent in the first half against Penrith, but Moses played a big role. Who knows, maybe their second-half fadeout against the Panthers had something to do with Moses’ broken finger? Manly by 8.
Christian Nicolussi

South Sydney Rabbitohs v New Zealand Warriors, 3pm Saturday, Sunshine Coast Stadium
Didn’t the Bunnies blow it against Cronulla? That loss to the Sharks, along with the Wests Tigers defeat earlier in the year, could have had the Bunnies pushing for a top-four berth. Latrell Mitchell is a good enough reason to back the Bunnies with confidence. He slots back to fullback with the more-than-capable Taane Milne moving into the centres. They lose Kodi Nikorima but gain Blake Taaffe who will be keen to make a point off the bench. The dry Sunshine Coast track also works in the Bunnies’ favour. The loss of Chanel Harris-Tavita and Jazz Tevaga, an underrated workhorse, will do the Warriors no favours. Souths by 14.
Christian Nicolussi 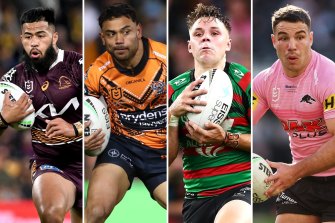 Canberra Raiders v Penrith Panthers, 5.30pm Saturday, GIO Stadium
Wouldn’t the Raiders love to get one back over Penrith? As much as both sides will play down the mocking of the Viking Clap and Stephen Crichton getting in the face of Jack Wighton and last year Joe Tapine after a try, there’s a genuine dislike between these clubs. Nathan Cleary and Jarome Luai are huge outs, but Sean O’Sullivan will play behind a world-class pack that will give him plenty of time with the ball. Isaah Yeo will also make sure he takes some of the pressure off O’Sullivan in attack. Canberra need this more than Penrith, which makes them dangerous. Jordan Rapana being back adds some attacking threat — and size — against the smaller Penrith backs. Panthers by 2.
Christian Nicolussi

Cronulla Sharks v St George Illawarra Dragons, 7.35pm Saturday, PointsBet Stadium
Last chance saloon for the Dragons, who need to beat their local rivals to have any chance of making the finals for the first time in four years. Even despite last week’s second-half capitulation against the Cowboys, coach Anthony Griffin has named the same 17 for the Red V. Cronulla coach Craig Fitzgibbon has opted for debutant Kade Dykes, a third generation Shark, to make his NRL debut in the No.1 after Will Kennedy’s injury. The Sharks can take a giant leap to sewing up a top four spot in the derby – and even pressure the Cowboys for second spot. They have won six of their last seven against the Dragons and haven’t lost at home against St George Illawarra since 2018. Sharks by 14.
Adam Pengilly

Canterbury Bulldogs v North Queensland Cowboys, Salter Oval (Bundaberg), 2pm Sunday
Believe it or not, two of the form teams in the competition with the Bulldogs winning four of their last six and suddenly one of the more entertaining teams going around. Can’t see them getting past the Cowboys – who every week look more and more like Penrith’s main title threat – but fans will get their money’s worth in Bundaberg. Briefly forgotten man Hamiso Tabuai-Fidow gets a starting crack out wide in place of Kyle Feldt (hamstring) as Todd Payten juggles an embarrassment of attacking riches. Fingers crossed for a foot race with Josh Addo-Carr. North Queensland’s defence sharpened up against the Dragons after leaking 26 points for four weeks straight – can see Canterbury asking a few more questions. Cowboys by 12.
Dan Walsh

Wests Tigers v Newcastle Knights, 4.05pm Sunday, Campbelltown Sports Stadium
There’s trouble brewing in Newcastle, who knows where things will be with big man and big personality David Klemmer by kick-off given he’s been stood down for defying instructions from the coach’s box. Season’s end and some serious conversations can’t some soon enough for Adam O’Brien and new football manager Peter Parr. Jock Madden gets another chance to earn himself a new deal – be at Concord or more likely elsewhere – in the Tigers’ No.7 jumper while young Fonua Pole comes in at lock for Jackson Hastings (fractured ankle). Tigers by 10.
Dan Walsh