Manly Sea Eagles v Sydney Roosters, 7.50pm Thursday, 4 Pines Park
Equal on 20 competition points either side of the top eight yet the lead-in to this clash, and the stakes as well, couldn’t be farther apart for these two sides.

The Roosters welcome back Joey Manu and Lindsay Collins, while Luke Keary looked right at home in his own return last week. Manly are short seven first-graders and scrambling to replace them with rookies and journeymen. The fallout and divide from the club’s pride jersey saga has the potential to derail Manly’s season, and it’s hard to see anything but that translating on the paddock as the Tricolours find form. Roosters by 18.
Dan Walsh

New Zealand Warriors v Melbourne Storm, 6pm Friday, Mt Smart Stadium
Strange times at the Storm with four losses on the trot for the first time since 2015, though the last time they lost five straight in a season they won the 2012 title. Cam Smith recalled the same despondency then in Craig Bellamy that shocked plenty over the weekend. The difference though is this Melbourne outfit doesn’t boast messrs Smith, Slater and Cronk. The Warriors have little to play for beyond the home fans they’re back in front of at Mt Smart Stadium. Melbourne’s edge defence remains a major issue, but surely they’re due to hang onto the ball long enough to break this drought. Storm by 8.
Dan Walsh

Parramatta Eels v Penrith Panthers, 7.55pm Friday, CommBank Stadium
Even without Stephen Crichton (concussion/ear) and Jarome Luai (knee), the premiers should be too strong for an out-of-sorts Parramatta. The Eels have troubled their western Sydney rivals in recent years, but they almost appear down on confidence at the moment. Nathan Cleary’s kicking game and Api Koroisau’s work out of dummy-half gradually wore down the Sharks, and expect them to do likewise against the blue-and-golds. Dylan Brown needs to step up and take some pressure off Mitch Moses. Panthers by 8.
Christian Nicolussi

Gold Coast Titans v Canberra Raiders, 3pm Saturday, Cbus Super Stadium
Even Ricky Stuart’s calf injury won’t slow the Green Machine down this week. The Raiders head to the Gold Coast as favourites to claim their fourth win in their past five games, and they have a chance to stake a serious claim for a finals spot with a favourable run home. Penrith are the only top-eight side on the horizon for Canberra, although they have two crucial clashes with fellow finals hopefuls St George Illawarra and Manly. The Titans have shown some positive signs in recent weeks but Tino Fa’asuamaleaui desperately needs more help if they are to cause an upset here. Few can see it happening. Raiders by 12.
Caden Helmers

Cronulla Sharks v South Sydney Rabbitohs, 5.30pm Saturday, PointsBet Stadium
The loss of Dale Finucane will hurt the hosts. The two-match suspension was the last thing the Sharks needed against a resurgent Souths side whose pack are underrated. Latrell Mitchell looms as the key as he tries to inspire a fifth straight victory in as many games since he returned from the US. The Bunnies are full of confidence. Cronulla took it to Penrith, and had they held the ball would have gone a lot closer. Rabbitohs by 4.
Christian Nicolussi 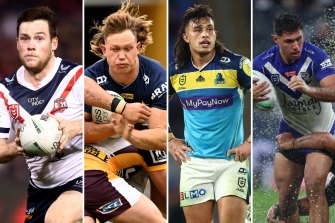 Brisbane Broncos v Wests Tigers, 7.35pm Saturday, Suncorp Stadium
How can the Tigers possibly dust themselves off after Sunday’s heartbreaking loss? They played some decent football and should take a ton of confidence out of the performance. Sadly, the Broncos in their own backyard will not be easy. Adam Reynolds is directing this team of young hungry forwards and electric backs beautifully. Patrick Carrigan gets better each week. Daine Laurie played one of his best games for the Tigers at the back, while Adam Doueihi’s fitness levels improve with every game. But this one won’t be easy. Broncos by 10.
Christian Nicolussi

Newcastle Knights v Canterbury Bulldogs, 2pm Sunday, McDonald Jones Stadium
Even Kalyn Ponga says the Bulldogs have the “hot hand” at the moment and Newcastle won’t have their star fullback to dig them out of trouble this week, with a series of concussions leaving his immediate playing future in doubt. Tex Hoy returns in his place before he packs his bags for the Super League. Canterbury have scored 140 points in their past five games with Matt Burton and Josh Addo-Carr turning into human highlight reels. They welcome Jake Averillo back into the No. 1 jersey this week and will be too hard to stop for a Newcastle side on the slide. Bulldogs by 10.
Caden Helmers

St George Illawarra Dragons v North Queensland Cowboys, 4.05pm Sunday, Netstrata Jubilee Stadium
North Queensland know they should have lost to the Tigers. Whether that’s enough of a wake-up call after the Origin period is worth watching. Plenty of breakout teams with young players tasting rep footy for the first time fall away afterwards – a guy like Reuben Cotter returning from injury can help shake that. The Dragons are one of those four teams fighting for a top eight spot but their -98 points differential means they effectively need an extra win to play finals. Drop this one and it’s all but must-win stakes for the rest of the year. Cowboys by 4.
Dan Walsh

See how the Herald’s experts tipped for Round 20 here.