Even if they haven’t technically broken the rules, NRL CEO Andrew Abdo is less than impressed with aspects of Penrith’s grand-final celebrations, labelling them “disappointing” for portraying the game in a bad light.

The NRL’s integrity unit is investigating a raft of incidents involving Panthers players which have created damaging headlines since their victory over South Sydney in the decider. Tyrone May is involved in two of them.

He posted a photo of him leaving court last year alongside coach Ivan Cleary after he was found guilty of four counts of intentionally recording an intimate image without consent. The pic was captioned with lyrics from Canadian singer Drake that appeared to paint him as the victim in the sex-tape scandal that rocked the game in 2019. The post has since been deleted.

May is also the subject of a separate probe, with the integrity unit investigating whether three men caught illegally crossing the Queensland border to watch the grand final have links to him and halfback Nathan Cleary.

Star forward Viliame Kikau also posted himself singing “glory, glory to South Sydney”, which the Rabbitohs have privately felt was disrespectful. Then there is the damage to the Provan Summons trophy while in the club’s possession, and subsequent photos that some players posted.

Abdo, who is hopeful of closing the investigation in coming days, said one of the learnings to come from the incidents is being mindful of how the game is being portrayed on social media.

“There are two things here; one is if your actions are a clear breach of the rules or not in line with the standards, regardless of whether that is on social media or not. We need to deal with that,” Abdo said.

“The second is how that gets played out publicly. Even if people are not breaking the rules necessarily, but are posting information that is offensive to some people or can be perceived to be offensive or disrespectful to some people, that’s not good for us from an inclusion perspective, that’s not good for us from a brand and reputational perspective.

“There are two elements; have they broke the rules and have they caused damage to the game more broadly?

“Even if we don’t take action on every matter, I think there’s a learning and an opportunity to work with everyone, players and clubs and the game on how we want to position the game, what we think is the right way for that to be positioned on social media and other platforms.”

Panthers legend and board member Greg Alexander last week suggested that some of the players needed to “pull their heads in”. Abdo hasn’t waited for the integrity unit to complete its findings to voice his frustrations. 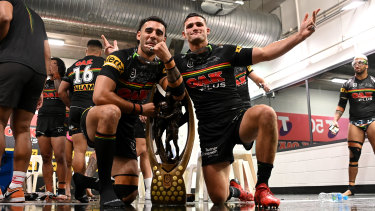 The Panthers may have crossed the line in their grand-final celebrations.Credit:NRL Photos

“Yeah, we have spoken to the club,” he said. “That’s part of the data-gathering process, part of our investigation. I’m not going to say what we have spoken about, but of course we speak to the club and the players involved.

“I’m not going to comment on specifics now because we’re in the middle of looking at each of these instances. I’m looking to wrap that up quickly, hopefully this week.

“But any time we’re in the news for the wrong reasons is disappointing for us. Some of the actions are disappointing, we now need to determine whether they are a breach of the rules. If they are, we will take appropriate action.

“Clearly they are not the headlines we want following what was a magnificent grand final.”

Asked if May’s post was one of the incidents being investigated, Abdo said: “There’s a range of issues we’re looking at and that is one of them.”