We’re underway in an NRL round we worried we might not see a week ago, at least not in this fashion. Queensland is the home for the NRL – and maybe for the rest of the season. Thank goodness we can still watch a bit of rugby league at the end of the week.

AJ Brimson kicks off for the Titans.

Only a few minutes away from kick-off between the Titans and Eels.

Mitchell Moses and Junior Paulo are huge losses for the Eels, but I’m still tipping Parramatta to extend Gold Coast’s misery against top eight teams this year. Eels by 10 points with Ryan Matterson to grab a try at some stage.

Who have you got?

How will the Dragons respond later tonight?

I think it’s fair to say the Sea Eagles and Dragons clash later is probably the game most people are looking forward to tonight.

How will St George Illawarra respond after Paul Vaughan’s infamous barbecue? They’ve decided to use the one-game bans for Matt Dufty, Kaide Ellis and Tyrell Fuimaono tonight, while Zac Lomax and Daniel Alvaro didn’t travel with the team after refusing to sign the sworn statement from the NRL. It’s still a fairly strong team Anthony Griffin has chosen, hoping to take advantage of a Trbojevic-less – Tom and Jake – Sea Eagles.

I think we’re going to know pretty early whether this COVID-19 breach is going to make or break the Dragons’ season. 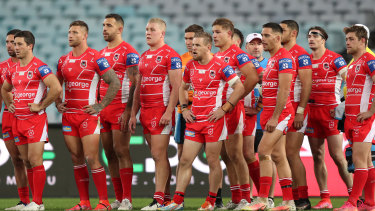 The Dragons will strike a deal that will allow them to field a competitive team against Manly.Credit:NRL photos

Who will be avoiding who in the Queensland hubs?

Oh, to be a fly on the wall at a few of these NRL hubs in Queensland.

The game has survived – and thrived – on hate. And colleague Michael Chammas has taken a look at the feuds which will create tension in the corridors and elevators at the hotels being used exclusively by NRL clubs.

Just some breaking news to hand in the last few minutes with the NRL announcing the schedule for round 19 next weekend. What strange times we live in.

So doubleheaders in Brisbane and Gold Coast next Saturday and Sunday respectively. I can’t imagine the amount of work that has gone in just to name those fixtures.

You get the sense it’s a really big night for the Titans, which are chasing one of those two spots at the bottom of the top eight with the top six pretty much set in stone. They haven’t beaten a top eight team all year. Is tonight the night?

Team news: Justin Holbrook will have all three of his State of Origin stars – Tino Fa’asuamaleaui, AJ Brimson and Mo Fotuaika – backing up from Wednesday night. David Fifita will also return from suspension for the game.

For the Eels, how will Mitchell Moses respond after his NSW debut? Well, we don’t know. Brad Arthur has rested Moses and Junior Paulo with an eye to the finals. Arthur’s son Jakob will be the halfback, Marata Niukore has been promoted to start in the front row while Will Smith comes onto the bench.

Does that change things?

When will the Sydney teams come home?

It looks like there’s a very real chance the rest of the season – or at least the regular season – could be played north of the border with the 13 non-Queensland teams in three separate hubs: Gold Coast, Brisbane and Sunshine Coast.

And the Queensland Premier has warned – any more biosecurity breaches and players will be sent home and not allowed to play for the balance of the year.

But the big news in the last 24 hours has been the Queensland government putting the brakes on the families heading north as soon as Saturday. Those plans are likely to be on hold for a week. 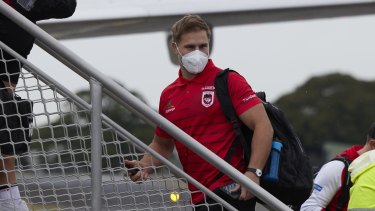 Jack de Belin boards a flight to Queensland with his Dragons teammates on Wednesday.Credit:Brook Mitchell

Well, State of Origin is done for another year and the sprint to the finals is about to heat up. Welcome to a Friday night doubleheader on the Gold Coast after a week which rugby league has never seen the like of before.

Every single one of the NRL’s 16 clubs are now in Queensland after mass relocation this week, avoiding the COVID outbreaks in Sydney and Melbourne.

So instead of just having the Titans v Eels at Cbus Super Stadium, we’ll also have the Sea Eagles against a decimated Dragons. Not bad if you’re a fan on the glitter strip. 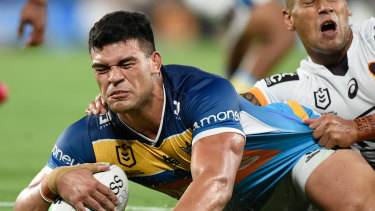 David Fifita will be key for the Titans.Credit:Getty