Home » Rugby » ‘Not in the spirit of the game’: Rennie slams Koroibete red card after dramatic series win for Wallabies

Australia did it the hard way – grinding through 75 minutes of intense rugby with 14 men following Koroibete’s send-off – to seal a dramatic and thrilling series win in one of the most resilient performances in Australian rugby history.

Wallabies young gun Noah Lolesio, who finished with a 23-point haul, booted a 73rd-minute penalty to give Australia a 30-27 lead but France’s sharp-shooter Melvyn Jaminet hit back to even scores with five minutes remaining.

The Wallabies won a scrum penalty and Lolesio, 21, iced a three-pointer with 112 seconds remaining before France were awarded a late penalty with just over 40 seconds to go.

A fourth draw of Dave Rennie’s nine-Test tenure as Wallabies coach looked possible but France kicked for touch, needing a win to clinch the series.

Somehow, the Wallabies spoiled France’s late push – thanks to second-rower Darcy Swain not letting the ball come out on France’s side of a maul – and retained the Trophee des Bicentenaires with a memorable 2-1 series victory in the space of 11 days. 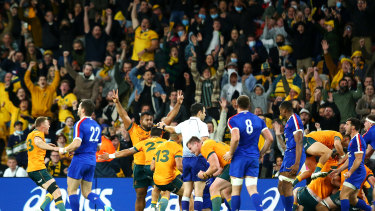 With less than five minutes on the clock, Australia’s most destructive player this series, Koroibete, sprinted up the field and executed a bone-crunching tackle on Jelonch, who dropped the ball.

Replays showed the contact was higher than normal but Jelonch dropped his height and, in real time, one could argue it wasn’t direct with the head.

The skipper’s overreaction – with a hand to the face and fall to the ground – exacerbated the situation. 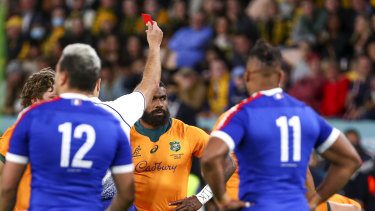 The Wallabies knocked off France despite a red card to Marika Koroibete.Credit:AP

Fifth-minute red cards normally ruin matches and Rennie was far from diplomatic when asked about it.

“It was terribly milked,” Rennie said. “He feels he got some head contact and he has grabbed his face which is nowhere near the point of impact and it’s delayed by five seconds.

“Every time there was anything like a head shot, these guys have been shot by a sniper. I find it disappointing.

“The issue for us is do we get to a stage where we’re telling our players to lie on the ground like the French do like any time they got any head contact? I don’t think it’s in the spirit of the game.

“Tate McDermott, in trying to stop a try, got a forearm straight to the throat. It’s a penalty, red card and disallowed try, but he doesn’t stay on the ground and milk it. Hunter Paisami got a shoulder straight to the jaw too.

Elsewhere, the backlash was fierce. Former Wallaby Simon Poidevin labelled the red card “a disgrace”, Owen Finegan, who scored a try in a World Cup final against France, also accused Jelonch of a dive, while Sonny Bill Williams, who was sent off against the British and Irish Lions in 2017, said the call was “very disappointing” and damaging to the game.

“We’re in a tough place in the game at the moment where we’re trying to get that balancing act between protecting the players and protecting the game,” Williams said on Stan Sport.

Injured Wallabies No.10 James O’Connor, in a fascinating moment of broadcasting access, couldn’t contain his emotions in a half-time interview.

“It’s pretty frustrating,” O’Connor said. “If you’re playing in the spirit of rugby, that’s not something you do. To me, it looked like blatantly he’s been hit and because he’s dropped the ball, he’s reacted to that.”

Former Wallabies captain Stirling Mortlock tweeted a photo of McDermott being hit and questioned the officiating.

The win was Australia’s first series victory at home since 2014.

“This is massive for us,” Rennie said. “To play 75 minutes one man down [showed] amazing character. We’re incredibly proud of the boys. I think it will be huge for the group.

“Tonight was just gutsy. I thought we kicked a lot better, we applied pressure through that. We defended pretty well for a big chunk of the game. I think we’ve been improving throughout the series and I reckon we’ve got a lot more in us. It’s a hell of an effort.”

Hooper added: “Very satisfying. There’s some seriously big smiles going on in the change room. It’s a reminder of how good it is to play Test rugby and play for your country.”

The Wallabies, spurred on by what they felt was a miscarriage of justice, grew arms and legs, having already lost winger Filipo Daugunu in the second minute through injury. 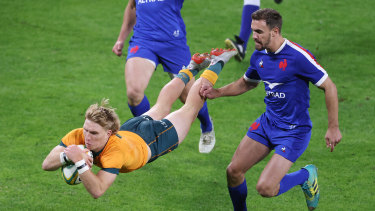 The red card was red mist for the Wallabies. Ferocity and accuracy at scrum-time went through the roof and Australia’s backs played with freedom and fearlessness.

After trailing 10-0 at one stage, the team’s two young halves, McDermott and Lolesio, scored a try apiece in the space of nine minutes to put Australia back in the lead 14-13.

Jelonch and referee O’Keeffe became Australian public enemy No.1 and No.2, with a vociferous crowd of 34,164 at Suncorp Stadium letting them both know it. The French skipper was booed in his post-match interview.

When Teddy Thomas chipped over the top and France spread the ball right for a brilliant long-range five-pointer, the Wallabies trailed by seven. Sides in years gone by would have rolled over.

Australia’s back-rowers relished the breakdown battle, with Hooper and Isi Naisarani aiming up in the physicality stakes. Swain was also immense.

A critical Naisarani turnover paved the way for Taniela Tupou’s fresh legs to power him over the line from a pick-and-drive to make it 27-27.

Back-to-back missed penalties from Jaminet and Lolesio only increased the tension.

The Wallabies kept fighting and dominated the possession and territory stakes, with Angus Bell and Rob Valetini going to another level.

Last week, France hadn’t won on Australian soil for 31 years. They should have done it twice in the space of 96 hours but a brilliant Wallabies showing has given Australian rugby the shot in the arm it needs.

Despite bringing out a depleted squad, enduring strict quarantine conditions and coming off the back of an exhausting Top 14 season, the tenacity of this French team was admirable.

Yet in a captivating decider, it was the home side that showed more heart when it mattered most.

Although Australia will need to go up a gear in the Bledisloe Cup opener in three weeks, there was enough courage on display on Saturday evening to perhaps win back the famous trophy.