North Melbourne's Marley Williams has been offered a two-game ban by the AFL's match review officer for a head-high bump.

And Brisbane captain Dayne Zorko, teammate Connor McFadyen and Adelaide's Matt Crouch have been offered fines after being cited for weekend incidents. 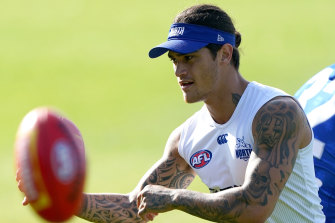 Marley Williams has been offered a two-game ban for his bump on the Western Bulldogs’ Ed Richards.Credit:AAP

Williams was reported on the spot.

Christian graded his contact on the Bulldogs utility as careless with high impact and high contact, resulting in a two-match suspension.

Adelaide midfielder Crouch was charged with rough conduct after a block which stunned Melbourne onballer Clayton Oliver in their Saturday fixture.

Crouch was offered a $3000 fine, reduced to $2000 with an early guilty plea, with Christian ruling it was careless conduct with low impact. 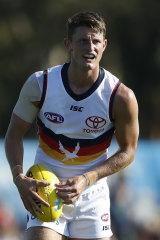 Lions skipper Zorko was fined $4000, reduced to $2500 with an early guilty plea, for misconduct.

Zorko pushed Port Adelaide's Kane Farrell near a boundary line, with Farrell colliding with a trainer on the other side of the boundary.

The incident was a fourth misconduct offence for Zorko, leading to a maximum $4000 fine.

Christian rated McFadyen's contact as careless, low impact and high contact, resulting in a $3000 fine, reduced to $2000 with an early guilty plea.