As Richmond celebrate their 13th premiership and third in four years, the man who led the Focus on Football board challenge four years ago insists he has no regrets and claims the Tigers' modern-day success stemmed from the upheaval at the time.

It feels like a veritable lifetime ago that cardiologist Dr Martin Hiscock led a ticket – including 1980 premiership players Bruce Monteath and Bryan Wood – against the Tigers' board headed by president Peggy O'Neal. The group said Richmond were 35 years into a five-year plan and called for changes, including the return of Neil Balme to the club. 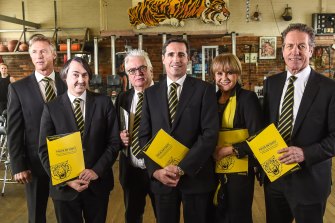 The Focus on Football group in 2016.Credit:Justin McManus

Despite all the noise, that spill didn't eventuate, but Balme did come back to Punt Road that off-season as head of football. The rest is history, with Richmond breaking a 37-year premiership drought the following season before prevailing again in 2019 and 2020.

Hiscock said he was happy with how things had worked out and paid tribute to O'Neal and chief executive Brendon Gale, whose ambitious 10-year plan, revealed in The Age in 2010, materialised with the club's third premiership of his reign.

Hiscock added that the Tigers had ultimately taken on just about every recommendation made by the dissenters.

"When we challenged, I said 'we've got to stop kicking it sideways and stop kicking it backwards, and run in numbers and go to war for the coach.' And that's what Richmond's done ever since," Hiscock said on Sunday. 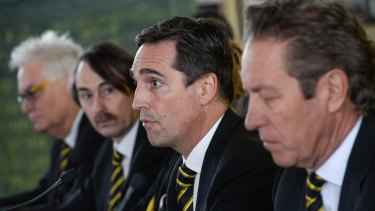 "I honestly think bringing Neil Balme to the club was instrumental. Neil said to us 'don't mention at the press conference [in 2016] that you've spoken to me.' We said we'd bring him to the club and [reporter] Tony Jones says 'well have you spoken to him?' and I said 'no.'"

Dr Hiscock said he was happy with the decision to challenge the board, which prompted a long meeting with O'Neal.

"Very glad. It's not an easy thing to do. We had people ringing up my hospital looking for dirt. I knew that was going to happen. I knew I was going to be sledged in the media," he said.

"I have no regrets. It needed to be done. We wouldn't have won the 2017 flag without a challenge. We forced a lot of other changes. Basically everything we suggested, Peggy did.

Hiscock also said supporters of other clubs could learn something from what transpired at Richmond.

"Yes. You need to be accountable. A lot of clubs are lingering."

He floated Collingwood as a club that would benefit from a challenge.

"But who's going to challenge Eddie McGuire with all that power and media influence?"

At the time of the challenge, O'Neal strongly condemned the ticket's move.

"Instability and change equals chaos and I refuse to let that happen to my club," O'Neal said in 2016.

"We believe there are more constructive ways of effecting lasting change than those outlined today by those seeking to take over this board."

Keep up to date with the best AFL coverage in the country. Sign up here to our Real Footy newsletter delivered to your inbox on Mondays and Fridays.