Sam Walker is no longer battered, bruised or “battling every week just to be fit”, but he’s more than ready to hand creative control of the Roosters’ finals charge back to Luke Keary.

Keary is expected to end a six-week concussion lay-off in Newcastle on Friday night, raising selection queries around Trent Robinson’s scrumbase given the superb form of Joey Manu since he was shifted to five-eighth.

The long-planned halves pairing of Walker and Keary had struggled at times for cohesion before the latter’s sideline stint.

Keeping Manu in the No.6 jumper alongside Keary and shifting Walker to the bench as a super sub remains an option, though the Tom Trbojevic-style roving centre role that Manu flagged with the Herald last week would seem more likely given Billy Smith’s third ACL rupture against the Dragons.

Walker’s outstanding 2021 debut campaign saw Robinson managing his game time off the bench by the finals, wary of the regular painkilling injections needed just to get Walker’s teenage body on the paddock.

Walker welcomed Keary’s expected return as senior playmaker but stressed if he does drop back to the Roosters interchange ranks, it won’t be in the name of preservation. 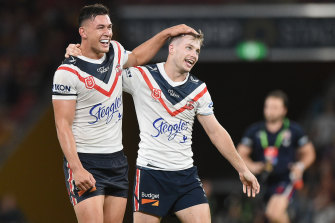 Joey Manu (left) and Sam Walker have been in decent touch as a halves pairing of late.Credit:NRL Photos

“[Keary] definitely takes the pressure off me,” Walker told the Herald.

“He’s got a great kicking game and he’s just a great leader. He directs the team around to where we need to go and it takes the pressure off my back there. I think he’s passed those protocols so hopefully he’s good to go.”

As for his own AC joint issues in the same shoulder that required surgery when he first arrived at the Roosters, Walker is quietly chuffed at his progress.

“I feel unbelievable. My body feels the same as I did in round one, there’s no problems at all. I feel great and I’m in such a better spot this year for the back end of the year.

“Last year I was battling every week just to be fit, I was getting needles just to play.

“Knowing I can play week-in, week-out is massive. Touch wood, but this year I’ve got a lot more confidence in my body. I’ve got to stay on top of it but it’s great to have that.

“I’ve put on a few kilos and have a few more to go and that’s helped with my defence and I feel a bit stronger in attack.”

Keary’s own survival as an 80-odd kilo playmaker with three premiership rings has long provided Walker with a blueprint to navigate the NRL.

Along with Jared Waerea-Hargreaves (hamstring) and most likely Lindsay Collins (concussion protocols), Keary offers much-needed reinforcements for a Roosters side rocked by Smith’s season-ending knee injury and similar fears for back-rower Sitili Tupouniua.

Workhorse prop Siosiua Taukeiaho confirmed on Monday he had suffered “a couple of fractures” in his cheekbone against the Dragons but is hopeful he is not facing a lengthy recovery.

Further down the line, talks around Walker’s long-term future are underway between the Roosters and his management, with the club keen to tie him down before he officially becomes a free agent on November 1.

Walker said he has “made clear” that he sees himself at the Roosters well beyond his current deal which expires at the end of 2023, with a significant upgrade on the cards.

Having been born in Leeds during his father Ben’s Super League stint, enquiries were also made by England officials about following the same eligibility path as Roosters teammate Victor Radley.

“I think they called my manager but I’ve made it pretty clear that I want to play for Queensland and Australia so that’s as far as it goes,” Walker said.