Home » ‘Most painful experience of my life’: Freak accident that saw Cartwright lose 10kg in a week

Parramatta’s Bryce Cartwright says he lost 10 kilograms in a week after a tackle on Blake Ferguson left his jaw “sideways” in a freak training accident in February.

Cartwright, who missed the first four rounds of the season as a result, said he knew straight away his jaw was broken after the cover tackle went horribly wrong.

Ferguson’s boot struck Cartwright in the mouth, the former Panthers star labelling the injury: “The most painful experience of my life.” 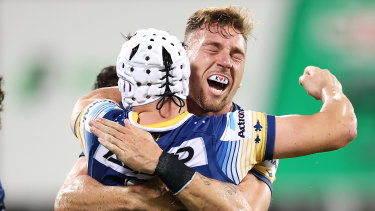 Bryce Cartwright celebrates his try against the Broncos on Friday night.Credit:Getty

Even coming off the bench on Friday night, he was instrumental in Parramatta’s 46-6 win in Darwin, during which Maika Sivo scored a hat-trick.

“It’s probably my most consistent game for a while,” Cartwright said. “It was nice to have a decent game but, in saying that, I don’t want to get ahead of myself.”

The 26-12 round five loss to the Dragons was the first NRL game Cartwright had played since July. The 25-year-old was released by the Titans in September after returning to Sydney in July for “personal reasons”.

The 2020 season was a turbulent time for the Eels recruit, who controversially refused to get a flu shot as part of the NRL’s restart protocols amid the COVID-19 pandemic.

Cartwright has been eager to prove his worth to coach Brad Arthur, who took a chance on him with a one-year deal. No other clubs approached him with an offer upon his return to Sydney.

“About two years before I had a chat with him, he wanted to see how I was going back then and what was going on,” Cartwright said about Arthur.

“So when they called again it was nice that he was still thinking of me and we went pretty quickly from there. We met and then I signed on a week later.”

Cartwright now has a plate in his jaw and surgeons also pinned it back so he is able to bite in the same place as before.

“My first game back I was pretty scared to make that sort of tackle again, but as soon as I did I was fine,” he said.

“I’ve had a few injuries now. Everyone knows it’s part of football. You need to overcome those things.”