Nor did he imagine his club would debut nine rookies as a result of a horror injury toll, in a season he dubbed the craziest he had known.

When asked what his plans were after his final game on Friday night in a semi-final loss against Manly, Morris said it was time for rest.

“I’ve been a professional athlete half my life. This next chapter, it’s about finding out who I am and what I want to do moving forward,” he said.

The final moments of Morris’ career were far from what the veteran deserved.

Alongside the 42-6 Manly thrashing, Morris’ 324 games were wrapped up instantly after a lacklustre penalty at the 80-minute buzzer. The penalty followed a high shot on Sam Walker from Manly winger Jason Saab.

Instead of handing Morris the option of a penalty kick or trying for one last try for the 35-year-old, Walker took the tap before punting the ball into touch. 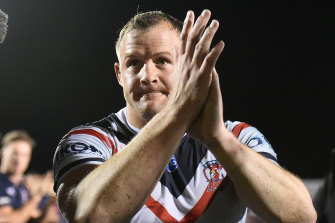 Josh Morris becomes the only NRL player to have finished their career in Mackay. Credit:Getty

Captain James Tedesco and Victor Radley threw their hands up in the air in frustration, with the 19-year-old apologising to the duo after realising his error.

“Whilst tonight was tough, it’s not going to define how I think about my whole career, I’ve loved every minute of it,” Morris said.

Post-match, Roosters coach Trent Robinson spoke about the moment of miscommunication but said it didn’t detract from what was always going to be a special moment.

“He doesn’t need to kick a goal to finish a career in the right way,” he said.

Morris admits his final game was bittersweet. After all, the dream was always for the Morris twins to walk off the field one last time together.

That dream was dashed earlier in the year when Brett went down with an ACL injury.

“It wasn’t ideal,” Morris admitted after the game.

“But at the same time, that’s part of footy. Some of the best moments of my life [were in the NRL] and I got to share them with one brother and my best mate.”

As Morris now sails into a life of brewing after launching his own beer brand Cattleman’s Lager, he can only hope he has helped turn some of this year’s rookies into future leaders.

“Whilst this season didn’t finish the way we wanted to, we can be super proud of what this group has been able to achieve with the adversity that they’ve had in front of them,” he said about finishing his career in a year littered with injuries, retirements and making the impossible possible.

“Sometimes we just have to laugh like when we’re having conversations. We were like, ‘who have we got?’ And we’d just start laughing. I guess I saved the best till last.”

In true Josh Morris style, the veteran left the field having written just one last page in the history books. He is now the only NRL player to have finished their career in Mackay.

“There’s a saying about filling the 60 seconds with a distance run, about running every second of your minute, and he ran every second of that minute, right to the end,” Robinson said post-match.

“He can rest now and feel really proud about the way that he played the game of rugby league.”