He may have found himself back at centre but Latrell Mitchell's debut at fullback in the NRL All Stars clash was a success, Indigenous coach Laurie Daley says.

The stage was set for an epic fullback battle when NSW centre Mitchell lined up against Maori No.1 Kalyn Ponga in Saturday's All Stars clash after switching to the custodian role following his off-season move to South Sydney. 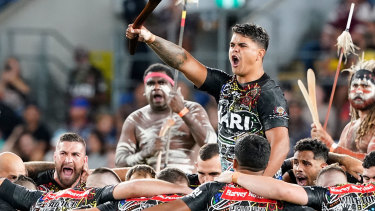 Latrell Mitchell at the centre of the Indigenous All Stars war cry prior to their clash with the Maori.Credit:AAP

"He will get better as the season goes on. He had some nice touches."

Mitchell produced a sublime flick pass for Josh Addo-Carr when returning the ball in the 26th minute that looked to have set the Melbourne flyer try-bound, only for the winger to spill the ball.

And in the second half Mitchell's clever grubber behind the Maori defensive line forced a drop-out.

Arguably in defence he was even more impressive, pulling off two try-saving tackles on Ponga (35th minute) and two-try man of the match Brandon Smith (56th).

But eyebrows were raised when he spent a second-half stint back in the centres with Alex Johnston slotted into fullback by Daley.

The Indigenous mentor said it was not a slight on Mitchell's fullback audition, just a way to cope with their injury toll that claimed Wade Graham (ankle), Tyrone Roberts (ankle), Josh Kerr (knee) and Chris Smith (knee).

"And with the injuries we had, Alex was going well so I didn't want to take him out of there, just move Latrell back to left centre." 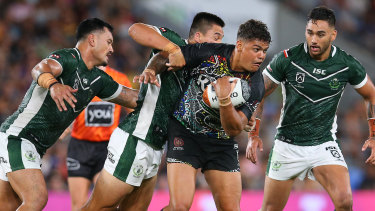 Latrell Mitchell is wrapped up by the Maori defence.Credit:Getty

Besides, Daley admitted Mitchell wasn't handed any favours in his much-anticipated run in the No.1 jersey.

"It was hard for him to get involved in the game. The ruck speed wasn't fast," he said.

"And every time we went wide we sort of had to turn the ball back in the middle, or we just didn't have enough numbers pushing."

In the end Mitchell ran 56m, had six tackle breaks, 61 kicking metres and one forced drop-out.