The NRL’s silly season has quietened and it’s only two months until the 2022 season begins, with a host of coaches under pressure and recruits trying to justify big-money moves.

Here are the big questions hovering over your club this year:

Will Kotoni Staggs be the yin to Adam Reynolds’ yang?

It almost seemed absurd when Kevin Walters said the Broncos would have made the finals last year if Staggs had played the full season, but what if it wasn’t as silly as it sounded? Sure, Reynolds will make a huge difference given his level-headed, game-management style Brisbane desperately craves, but Staggs is almost like a new signing given he’s played only four games in 18 months. If his off-field problems are over, Staggs might just be the barometer for the Broncos’ season. 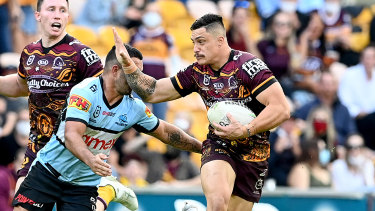 Kotoni Staggs will hope to ensure his injury-plagued 2021 season is but a distant memory.Credit:Getty

Is Jamal Fogarty the answer?

Ricky Stuart waited and waited to find a replacement for mid-season departure George Williams, and finally got one with Fogarty. He could be everything Jack Wighton needs: steady, dependable, with a good kicking game. Perhaps no team disappointed more in 2021 than the Raiders, and the uncertainty around their No.7 was a factor. Stuart, rightly, demands a lot from his No.7, and he will need their recruit to be a driving force if they are to return to the finals.

How quickly can their new combinations work together? 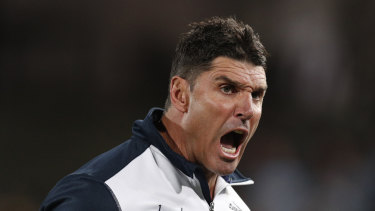 Trent Barrett will hope to meld a host of new signings at the Bulldogs in 2022.Credit:Getty

It’s fine to bring in a stack of new players, but now Trent Barrett has to get them working together – and quickly. Matt Burton might be one of the most important signings in the club’s history, but he’ll need help. And the Bulldogs still have question marks over their No.7, whether it be Jake Averillo, Kyle Flanagan or Bailey Biondi-Odo. After opening the season with a trip to Townsville and then hosting the Broncos, they play last year’s top four in consecutive weeks in a treacherous start to the season. Bulldogs fans deserve to be optimistic about their recruitment blitz, but it’s going to need to click fast.

Can Nicho Hynes be the main man?

Remember when Sharks fans were fretting over missing out on Adam Reynolds? Maybe not as much now. Hynes, the former Melbourne star, was arguably the find of the 2021 season. But can he be as effective without Cameron Munster, Jahrome Hughes, Brandon Smith and Harry Grant in the band? New coach Craig Fitzgibbon will keep his options open, whether Hynes starts at halfback or five-eighth. Despite excelling at fullback filling in for Ryan Papenhuyzen, Hynes played most of his junior football in the halves and will shoulder most of the attacking load for his new club. If he fires, the Sharks will make the finals. 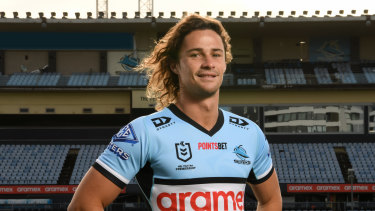 Much will depend on new Sharks recruit Nicho Hynes if they are to make the finals.Credit:NRL Photos

How will they get the best out of both AJ Brimson and Jayden Campbell?

Two into one doesn’t fit, and Justin Holbrook has banked on Brimson making the move to five-eighth so both he and Campbell can be in the Gold Coast’s best 13. Jamal Fogarty, Ash Taylor and Tyrone Peachey have all been released, meaning the Titans are like to start the season with the promising Toby Sexton, with just four NRL games under his belt, and Brimson in the halves. No team will have as little experience in the spine, and the Brimson experiment is going to need to work.

It might be impossible for Tom Trbojevic to be as good again, so where is their improvement going to come from?

Trbojevic can’t have another season like the last, surely. He’ll be great again, but he’s going to need help this time. So where do the gains come from? Des Hasler has arguably the NRL’s most settled roster – Brisbane’s Ethan Bullemor arrives, while 2021 fringe players Moses Suli and Curtis Sironen have exited – so he’s going to need improvement from the likes of Josh Schuster, Taniela Paseka and Haumole Olakau’atu if they are to go one game better and make the grand final.

What effect will an off-season from hell have on the NRL’s culture kings?

Can you ever remember the Storm having a worse off-season as the one just gone? It started with the white-powder scandal and suspensions to Cameron Munster, Brandon Smith and Chris Lewis, and included Nelson Asofa-Solomona’s vaccination stance, Tui Kamikamica’s police charges and no-fault stand-down – and then had Smith’s expletive-laden podcast and defection to the Roosters at the end of 2022. For a team that always wins round one and has a finals spot sewn up by State of Origin I, Melbourne have a bit to digest before a ball is kicked in anger. 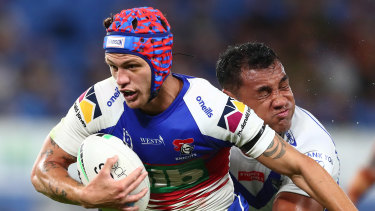 Knights fullback Kalyn Ponga has a clause which will allow him to leave Newcastle at the end of 2022.Credit:Getty

Let’s just forget, for a moment, about Newcastle’s spluttering attack (second worst in the NRL, behind only the Bulldogs last year) and the return of eighth Immortal Andrew Johns to their coaching staff – the question of the year is: will their marquee player stay beyond 2022? As each day ticks by, and Wayne Bennett’s Dolphins still don’t have a franchise player, the more interesting the Ponga conundrum becomes. He will have until midway through the year to take up the option for 2023 and 2024. On the field, he has no Mitchell Pearce to lean on. Off the field, he will be asked about his future relentlessly.

Have we seen the best of Jason Taumalolo already?

Remember that 10-year deal which was being hailed as a game-changer, and one that might have even been seen as a bargain for the Cowboys? Yeah, well it’s still got six years to run. And the NRL’s most fearsome forward is coming off the most difficult year of his career, with injuries and form dips. Sure, the NRL’s rule changes might have brought him back to the field. But if Todd Payten’s side is any chance of making a run at the finals, they need a vintage Taumalolo.

Is this the last chance they have to win a title for several years?

In the words of coach Brad Arthur, they don’t just think they can win that long overdue title – they now know they can after coming within a whisker of toppling eventual premiers Penrith in the finals. But the impending exits of Reed Mahoney, Isaiah Papali’i, Marata Niukore, Ray Stone and Oregon Kaufusi at the end of 2022 will likely mean one of two things: boom or bust. Arthur will use it as motivation to galvanise the group for one last premiership push; others will argue the NRL transfer merry-go-round has the potential to tear their season apart. You feel it has to be make a grand final now, or maybe it won’t happen for a while. 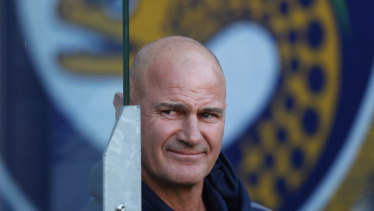 Parramatta coach Brad Arthur is under pressure to take the Eels to a grand final.Credit:NRL Photos

They’ve climbed Everest, but will they have the hunger to do it all again?

Jarome Luai says they now want to go to the moon, having conquered the world’s biggest mountain. But deep down will they be as desperate? Vengeance is a wonderful motivator, and the 2020 grand final stung so much they tackled their way to a title, despite scoring only six tries in four finals games. Ivan Cleary has to find a new purpose to inspire his side, which has lost five players out of its grand final 18. Nathan Cleary’s shoulder injury will take time to heal, and a team which has exploded out of the blocks in the last two years might take a little longer to kick into gear in 2022. 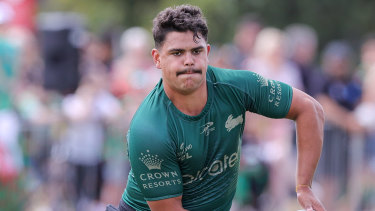 Latrell Mitchell might have designs on a move into the halves despite his impeccable form at fullback.Credit:Getty

Does Latrell Mitchell really want to move from fullback?

Wayne Bennett’s successor, Jason Demetriou, knocked it on the head pretty quickly, but their star man has wandering eyes when he hinted he potentially had designs on another position down the line. Is he sick of all the running at fullback? Would he prefer to be in the front line to intimidate through his defence? Does he want to team up with great mate Cody Walker in the halves? Demetriou is undecided on Adam Reynolds’ halfback replacement at the moment, but his fullback has just started another debate. Watch this space.

Do they have the backbone for a fight?

The barbecue saga was always going to hurt their season, but it shouldn’t have destroyed it. Yet the infamous COVID-breaching party only gave fuel to their detractors, who accuse the Dragons of having a soft underbelly. Albeit undermanned in some games, they crashed out of the top eight and lost their last eight games upon relocating to Queensland. Coach Anthony Griffin is fighting for his future and has ripped the roster apart, bringing in Jaydn Su’A and Moses Suli, along with some cheap veterans. He has a number of bright young prospects to work with, but between the ears is where the big challenge lies.

How much more durable will Sam Walker’s body be?

How can a team lose Boyd Cordner, Jake Friend, the Morris twins and Isaac Liu within 12 months and still be considered the premiership favourites? Well, the Roosters just seem to find a way. A fit-again Luke Keary and a bulked-up Sam Walker will have opposition coaches sleeping restlessly for most of 2022, as they are perhaps the most instinctive halves pairing seen in the NRL for a long time. Trent Robinson knows what he’s got with Walker, using him as a pinch-hitter in big end-of-season games, as the brutality of a first full year in the NRL started to take its toll. He’s a freak and just needs to stay fit. 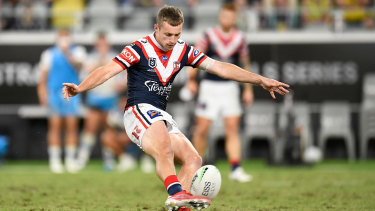 Sam Walker has added bulk to his previously light frame to help withstand the rigours of the NRL.Credit:Getty Images

Can they survive being away from home for another year?

Have they forgotten what it feels like to sleep in their own beds? For the third straight year, the Warriors will be on the road, this time basing themselves in Queensland. They are tentatively scheduled to play their first game back in New Zealand in mid-June, but who knows what the COVID-19 landscape will be by then. Regardless, the players and their families are expected to stay in Australia for the year. Coach Nathan Brown will have a huge challenge keeping his players focused deep into 2022.

Can Michael Maguire improve them enough to see out the season?

How desperate will Maguire be to keep his job, given the likes of Api Koroisau and Isaiah Papali’i are on their way in 2023? Having only just survived one end-of-season review, the premiership-winning coach will start the year desperate for a few wins with a squad that has made only small additions, in the form of Jackson Hastings and Oliver Gildart from the Super League, and Tyrone Peachey (Titans). He will need to show Tim Sheens and the board enough development in the young group of players and rejuvenate Luke Brooks to get a better balanced roster the following year.