Home » Rugby » Mitchell keen to tour with Indigenous All Stars, but not at Kangaroos’ expense

Latrell Mitchell says he hopes opportunities for the Indigenous All Stars side to tour overseas will arise in the future, but his preference is for it not to be at the expense of the Kangaroos at a Rugby League World Cup.

Mitchell arrived back in Sydney on Tuesday morning, just days after bagging two tries in Australia’s 30-10 win against Samoa in the World Cup final. The South Sydney superstar was initially reluctant to tour, given the long period away from home and family, but described it as one of the best experiences of his career upon his return.

“We were never going to get beat,” said Mitchell, who was in Darling Harbour for the weigh-in for the Paul Gallen-Justin Hodges clash. “It was more, ‘How do we win?’ and make sure we make the team click. And we did.

“I didn’t want to put myself in a position there to go over and lose. Everyone was like that, we were all on the same page from day one. We really enjoyed the experience. It’s something I’ll remember and cherish forever. The Australian World Cup [jersey] is going straight into my man cave, for sure. And my boots.”

Mitchell has been one of the biggest supporters of the Indigenous All Stars fixture and is certain to make himself available for the pre-season clash against the Maori All Stars. New Indigenous coach Ron Griffiths is pushing for the side to participate in the next World Cup, but Mitchell said there were better ways to promote the team.

“What’s going on now [with the Kangaroos], it’s hard to break that up,” Mitchell said. “You talk about dividing a country; there are other ways to look at it. I don’t want to comment on it too much or blow it out of proportion. 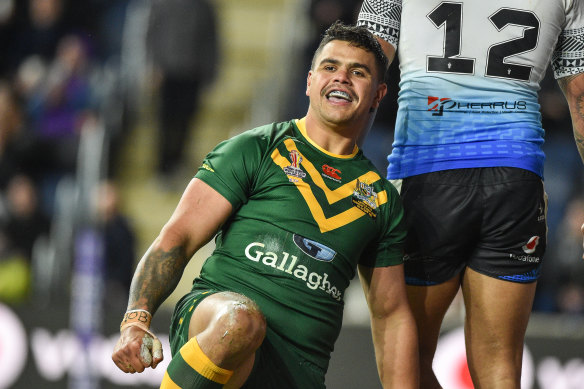 Latrell Mitchell was a standout for the Kangaroos.Credit:NRL Photos

“For the Indigenous All Stars we could tour a bit more. Instead of just playing the Maori All Stars, we could tour England and play England, do that kind of thing.

“That’s probably the best chance we can get. We [could] do [other things while playing] for Australia, getting an Indigenous jersey to play in or start doing the dance, performing or something little. We can get everything to tie in and be proud of the country.”

Mitchell has achieved every conceivable goal in the game, from winning premierships to starring at State of Origin level. However, he rated the Kangaroos’ World Cup win up there with any other sporting experience.

“It was really special,” he said. “It was six-and-a-half to seven weeks in another country.

“By the end of it, it was starting to get cold and I wanted to get home. But to play at Old Trafford and get the job done was well worth it.”

Asked to name a memorable moment, the 25 year old said: “Scotland was beautiful, it was probably the highlight of my trip.

“After we played, we went to Scotland and got among it. They definitely let us know a bit about it when we were going through the pubs. Definitely one to enjoy.”