The Latrell Mitchell who spoke to 1050 kids on Zoom on Tuesday was a far cry from the one media outlets had portrayed for the previous 72 hours.

This Mitchell was freely sharing his life experiences and offering life advice, just days after his darkest hour as a footballer. Mitchell had left friend and former teammate Joey Manu with a broken cheekbone on Friday, for which he was hit with a season-ending suspension, but spent time talking to kids doing it tough.

It came at the same time as his parents were moving into a house he bought for them in Taree.

These facts don’t sit well with the hysterical commentary surrounding Mitchell that poured out of the Twitter sewer and into the pages of usually reputable media outlets in the days after the match. The personal attacks on him are not worth repeating. They are also misdirected, given his upstanding off-field behaviour in dealing with the consequences of a brain snap on the field.

I’m not close to Mitchell, even though I’ve tried to forge a relationship. We talk when I see him, usually with a microphone in my hand. He doesn’t return my calls. We are not at loggerheads, nor are we friends.

To say I’m sticking up for his on-field actions is wrong. Mitchell should have been sent off. He deserved the six-week ban but to say he was trying to deliberately hurt Manu, as some have, is just plain wrong. 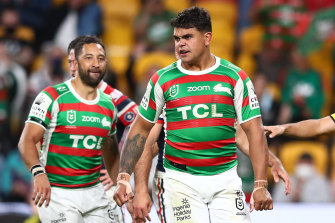 Latrell Mitchell has paid a heavy price for his tackle on Joey Manu.Credit:Getty

He is an aggressive footballer who is happy to treat everyone as his enemy on the field – just ask Queensland’s Dane Gagai, his Souths teammate, who Mitchell terrorised during this year’s State of Origin. Those bagging Mitchell for the Manu hit were the same praising him as he imposed himself on the interstate series.

He must learn how to best use his considerable power, because it has the potential to see him become a great of the game or shorten his career. I’d love to see his career play out over a decade or more, because he is important to the game – as his community work illustrates.

On Tuesday morning, he spoke with 1050 kids participating in Souths Cares programs on a video call. During his day off, he spent close to an hour talking to the kids and answering their questions about football and life.

He talked about what it took for him to reach the NRL, about setting small goals to reach bigger ones; he told them about the importance of respecting your parents and teachers. He emphasised finding time to still be a kid and have fun, and encouraged kids to chase their dreams.

He talked about the pride he has in representing his club, state and country but that he is most proud of representing the Indigenous All Stars because of what it means to his family (unfortunately, the NRL has ruled him out of next year’s All Stars clash due to his suspension).

He spoke about playing for South Sydney just as his dad Matt did, and about his greatest achievement: bringing up his two daughters.

“He’s such a humble man that has achieved so much at his age,” Alisha Parker-Elrez, general manager of Souths Cares, said. “He’s 24 years old, achieved so much on and off the field, but the highlight of his week was his parents moving into the house that he’s bought for them. He’s the first to check in with people if they are having a tough time, no matter what’s happening with him.

“He’s the most humble high-profile person at his age that I’ve come across in the NRL. He could have pulled out of this Zoom conference, but he rang me and said, ‘I’m committed to talking to these kids and I want to give back as much as I can’.

“We’ve talked regularly about how he can help Souths Cares during this time, and he is committed to giving back to the community.”

On the call, Mitchell said he’d had a rough few days but that it was nothing compared to what kids in NSW are dealing with in lockdown, not being able to get out and see family and friends.

He encouraged them to talk to the people they love and respect if they are feeling down.

Those who were on the call say he was humble, respectful and that he had clearly learnt that his football isn’t the most important thing to come from his NRL career.

The NRL gets so many of its punishments right, but during the week they missed the chance to show how mature an organisation it is under the leadership of Andrew Abdo.

Instead of taking the high ground it broke new ground by agreeing with complaints from the Roosters about a lack of on-field punishment for Latrell Mitchell’s high shot on Joey Manu – and then fining the club $40,000.

Imagine if the NRL backed up its admission of a major stuff-up by swallowing Trent Robinson’s criticism and moving on.

There has rarely been a more obvious case for a send-off than Mitchell’s, especially when the NRL is supposed to still be enforcing the crackdown on high contact that it introduced mid-season.

Only the bunker, which has lurched from mistake to mistake in recent weeks, could come up with a decision that 10 minutes in the bin was sufficient for Mitchell.

Even the NRL agreed. It publicly admitted that Mitchell should have been sent off and then relieved Henry Perenara of his duties in the bunker for the current round.

Yet the NRL still hit Robinson and the Roosters with $40,000 worth of fines when the gist of his argument was to demand the action that the NRL ended up taking. That’s where the NRL missed its chance to act with maturity to defuse the situation.

When there is a howler like we saw last weekend, the NRL should cut the coaches some slack.

Anthony Griffin’s rebuild at St George Illawarra doesn’t seem to include the kind of players who bring a culture to the club that most teams are crying out for.

Dragons and NSW Blues forward Tariq Sims has been told he is free to talk to other clubs. In Sims and Cameron McInnes, who signed for Cronulla earlier this year, you have players that can set a standard for any team but both are unwanted.

As an example, the Sharks signed Dale Finucane for an extra year on his deal, which starts next season, when others wouldn’t to ensure he can be part of a cultural shift at the Sharks.

When Sims wanted an extension at a club he loves, he was not embraced by the Dragons. Instead he was pointed in the direction of the door.

Sims didn’t attend the infamous barbecue at Paul Vaughan’s house, which was in breach of COVID-19 restrictions. The result was 13 Dragons players suspended and Vaughan having his contract torn up. Sims’ likely exit puts enormous pressure on new leader Ben Hunt, who is one of the few left who can set a standard the club needs.

Sims was recently made captain of the club, but only after Jack de Belin, one of the players suspended for attending the barbecue, was picked as a co-captain.

After Hunt was ruled out due to injury, the job should have been offered directly to Sims. He is now facing the very real prospect that last night’s game against the Rabbitohs was his last in the red and white strip of the team he dreamed of playing for.

Sims is in the final stages of his career, but he showed for the Blues in this year’s State of Origin series that he can still produce the highest quality football. He is now going to have to find a club for himself – he is a rare NRL player who negotiates his own contracts – and if he leaves you can bet he will show the Dragons how wrong their decision to let him look around was.

Deal or no deal

After we revealed Payne Haas’s dissatisfaction with his agent and salary last week, the Brisbane media pushing the line that his six-year deal with the Broncos was a done and dusted were scrambling.

We revealed his pay for this and the next few years, and made sure to say he was “scheduled” to receive $550,000 for this year.

Predictably, this figure was questioned, even though that’s the correct amount he was contracted to receive. Then word came out of the Broncos of a pay increase for this year – some $200,000 on top of the original $550,000. Neither Brisbane chief executive Dave Donaghy nor head of football Ben Ikin will discuss his contract details or pay, but I’m assured by them that he was given an increase.

That in itself is an admission he was underpaid.

But there is a problem with the story. The Haas camp are adamant he has not received the $200,000 increase for this year. They say they know nothing of an upgrade. And they assure me he is on $550,000 this year.

Even if he was on $750,000, on the open market he would attract much more than that.
Something’s not adding up.