McDonald Jones Stadium: On the same night Luke Keary made a winning return from his latest concussion, there were fresh fears for Kalyn Ponga following another head knock.

Ponga lasted just eight minutes on Friday night during a 42-12 loss to the Sydney Roosters.

It was the fifth time this season he has had a head injury assessment, and the third time he has failed to return to the field.

The biggest concern was how easily Ponga hit the deck after what appeared to be an innocuous tackle by Matt Lodge.

Lodge stuck out his left arm and made contact with Ponga’s right shoulder and neck. Despite Tyson Frizell pleading with referee Peter Gough to send the front-rower on his way for “a lazy tackle”, Lodge was not even put on report. 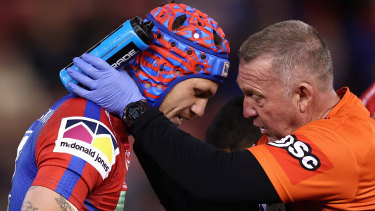 The Knights are eight points adrift of the top eight, and there must be a temptation to give their superstar No.1 the rest of the season off to recover. After all, Ponga is signed until the end of 2027, and has had a shocking run with head knocks. He was so gutted by the latest knock he remained in the dressing room rather than return to the sideline to watch the second half.

Keary came back for the first time since round 14, when he left the field clutching the back of his head with a huge look of concern. More than once the playmaker’s future has been questioned because of his well-documented run of concussions.

It would not have been lost on Keary he was making his comeback at McDonald Jones Stadium where he was flattened – and had his Origin dream delayed – because of a sickening head knock in 2019.

But Keary scored a try for the Roosters when pushing up in support of former Knight Connor Watson, who made a break down field, and later set up Daniel Tupou’s first four-pointer. He did well to punch out the entire 80 minutes. 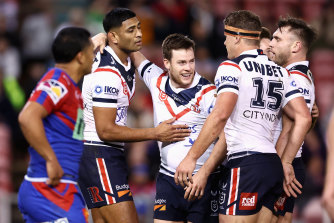 Luke Keary made a successful return from his latest head knock.Credit:Getty Images

The huge win means the Chooks leapfrog Manly back into the top eight. They play the Sea Eagles on Thursday night.

Joey Manu missed Friday’s clash due to a calf complaint and is expected to return. Joseph Suaalii bagged a double and was excellent, as was skipper James Tedesco. A healthy number of locals still manage to find their voice when Phoenix Crossland and Edrick Lee scored late consolation tries.

Suaalii was given a few minutes at fullback as Tedesco enjoyed a well-earned early mark.

Newcastle enjoyed most of the running early but coughed up the ball in good field position too soon in the tackle count. Frustrations boiled over for Dane Gagai, who let rip at Gough and was given 10 minutes in the sin bin for dissent.

The Knights also lost Lachlan Fitzgibbon to a fresh shoulder injury midway through the second half. Newcastle host Canterbury next Sunday.