It’s game day. Your favourite team is playing, and they have to bring home a win to make it to the grand final. Beyond running onto the field and kicking a goal yourself, what can you do to push the team through to the end?

Perhaps you put your left sock on first, listen to the same song on blast in the car, or eat the same chicken parma meal at your favourite pub before every game. Whatever it may be, you make sure you do it every single time.

Pre-game rituals are a staple of the sports world – a world where superstition abounds. From AFL to tennis, some athletes and spectators carry out specific activities religiously, either out of habit or with the belief it will bring their team luck.

“I used to watch an incredibly stupid-slash-easy movie to watch in the morning. The good one is the Olsen twins’ New York Minute – something as stupid as that. Cheaper by the Dozen, something easy to watch, two hours, done,” said Gawn, whose Demons play Sydney in a qualifying final at the MCG on Friday night.

Western Bulldogs skipper Marcus Bontempelli, who faces a do-or-die elimination final against the Dockers in Perth on Saturday night, tried to “stay pretty cruisy”, but even he still followed a ritualistic routine.

“I have an hour lie-down, then wake up, I have a coffee … I typically always kick with the same player – it’s Aaron Naughton – we always have a kick in the warm-up together.

“But nothing that’s ever cost me or frazzled me too much,” Bontempelli said.

And when Collingwood’s captain Scott Pendlebury prepares for the Magpies’ blockbuster qualifying final against Geelong at the MCG on Saturday afternoon, he’ll go with the classic left sock and boot on first routine.

For Melbourne fan Kirsten Linton, who will be cheering on the Demons on Friday night, it is less about superstition and more about tradition and social connectedness. Every year, she and “a good dozen” of her friends travel to the Northern Territory to watch their team – the Melbourne Demons – play the Heart of the Nation game.

The trip is steeped in ritual, beginning with their annual camel ride and ending with selling crêpes at the football grounds on game-day. 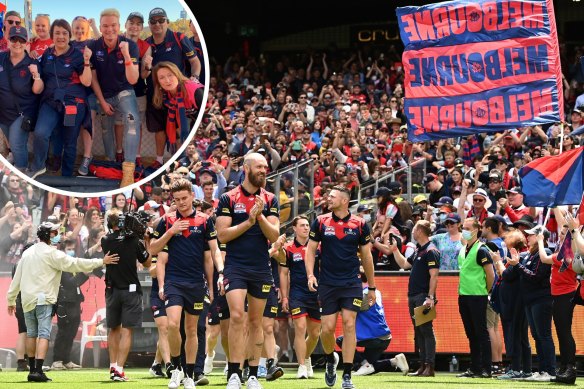 Melbourne fans including Kirsten Linton on an annual trip to the Northern Territory to watch the Demons, Melbourne captain Max Gawn leads the players on to the MCG.Credit:Getty Images, supplied

“I probably haven’t missed many games in over 22 years,” Linton said.

“Most of us are pretty much the same. Very few have missed any games at all, obviously before COVID. We go everywhere [the Demons play], it’s what we’ve always done. We’ve just been doing it our whole lives and most of us are in our 40s.”

The group generally follows the same routine each year: they fly over on a Friday, make the fan banner on Saturday and go on the sunset camel ride, which is followed by a stint at the local casino. The end of their holiday tradition is marked by the much-anticipated game on Sunday, where they help sell a popular French treat to hungry spectators.

“Superstition is just a huge thing. I think it’s a lot to do with family tradition,” Linton said. 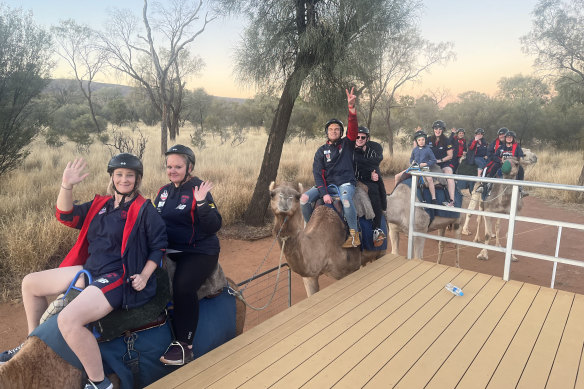 Kirsten Linton is no stranger to ritual. She travels to the NT with the same friends every year to watch Melbourne play.

“I’ve been going to the footy every week since 1994. Now with my 14-year-olds, we do similar things as to the way we were brought up.”

She said she believed many pre-game rituals were merely habit, but they could also become a strong uniting force, something to be passed down the generations.

Beyond the Northern Territory game, Linton said she and her friends meet for drinks at a local pub in Richmond before every game, and the group creates a banner together to wave from the stands.

“It just sort of keeps everyone together,” she said. “If we didn’t go, we wouldn’t see each other anymore. Most of my friends live in Brighton, Melton, the Bacchus Marsh area. We would sort of lose contact in that way.”

Nick Haslam, professor of psychology at the University of Melbourne, said superstition was rife within sports because of the uncertainty and high stakes surrounding games.

“Sport is one area of human activity in which uncertainty is ever-present and winning requires people to try to master it,” Haslam said.

“Humans have always been eager to discover the causes of uncertain events so we can predict and control them – we want to tame uncertainty – and superstitions naturally arise when we make inaccurate guesses about those causes.

“Perhaps an ancient cave dweller noticed one day that right after they scratched their head a woolly mammoth appeared, and a head-scratching ritual was then performed before every hunt.”

As in Linton’s case, Haslam emphasised that not all rituals are superstitious.

“Some rituals are just traditions people carry out that prepare them for the game or enhance their anticipation of it. The people engaging these rituals don’t imagine they magically alter how the game will unfold.

For example, Antuan Schocroft always sits in the last carriage on the train to the match, and Essendon supporter Pradong Ahmed, whose Bombers endured a miserable season, hosts a feast of sausage rolls and party pies the night before the game. Trevor B. Paterson is so committed to his ritual that he wore his traditional Richmond T-shirt to a wedding – tucked under his formal jacket and tie.

For others, it is perhaps just an excuse for a good time, like Shane Mulgrave who “smashes 10 pots at the All Nations [Hotel]” before catching the courtesy bus to the match. Every. Single. Time.