Daryl Powell will get the chance to lead his team out at Wembley in his farewell season after Castleford turned around their dismal form in spectacular fashion to defeat Warrington 35-20 in the semi-finals of the Betfred Challenge Cup.

The Tigers bounced back from the embarrassment of their 60-6 home Super League defeat by Leeds as well as a 38-14 loss to the Wolves a fortnight ago to run in six tries against the team Powell will join as coach at the end of the season.

Three of those tries came from former St Helens player Jordan Turner, who will get the chance to go up against his old club at Wembley on July 17 when Castleford will seek their first Cup success since 1986.

It was a remarkable transformation by the Tigers, who had no fewer than eight fresh faces, including second rower Alex Foster on his first appearance of the season.

They added a steely resolve to their defence while the return of former Warrington half-back Gareth O’Brien, who was preferred to Danny Richardson, and full-back Niall Evalds added a cutting edge to their attack which was sorely lacking against Leeds.

Que sera, sera, whatever will be, will be…

Warrington, who had scored 100 points in their last two league games, were all over their opponents in the opening stages but Evalds marshalled his defence magnificently to keep them out.

They had a let-off when stand-off Blake Austin lost the ball going for the line but then, inspired by O’Brien, they began to show their potency in attack.

O’Brien took a pass from dummy half Paul McShane and dummied his way over for the opening try in the 15th minute and kicked the first of his five goals to put Castleford into a 6-0 lead.

The crucial moment of the first half came four minutes later when Warrington centre Jake Mamo was sin-binned for holding down Turner in the tackle following a break by second rower Oliver Holmes. O’Brien kicked the resultant penalty and Warrington were still a man short when Evalds and skipper Michael Shenton combined to get Turner over for his first try, which was scored despite the last-ditch efforts of full-back Stefan Ratchford.

O’Brien’s third goal made it 14-0 and, with the momentum in their favour, the Tigers added a third try in the 27th minute when centre Peter Mata’utia’s break through the middle created the position for Evalds to get Turner over for his second try with a crisp cut-out pass.

O’Brien could not convert this time but McShane put his side four scores in front with a drop goal 90 seconds before the break.

Trailing 19-0, it needed a spark to get Warrington back into the game and it was duly provided by England second rower Ben Currie, who took Gareth Widdop’s pass to open his side’s account within three minutes of the resumption. 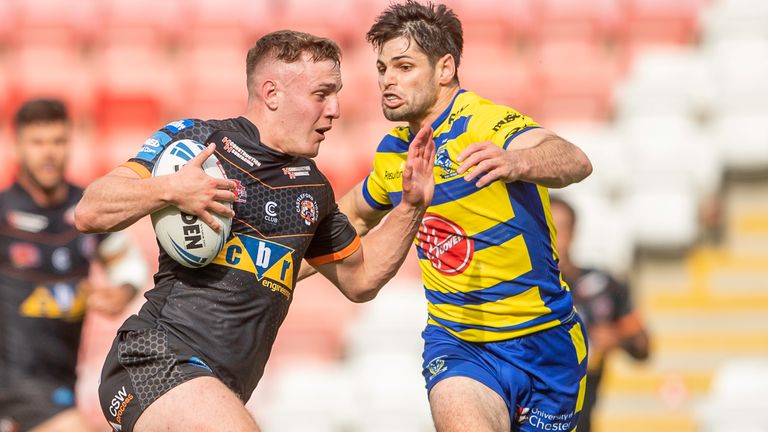 Two minutes later Austin put Mamo into a gap and he rounded O’Brien for the Wolves’ second try.

Ratchford could not add either conversions and the suspect Wolves defence was opened up again by Evalds, who delayed his pass to get second rower Jesse Sene-Lefao over for Castleford’s fourth try three minutes later.

Warrington threatened to loosen their opponents’ grip on the contest when Tigers substitute Jacques O’Neill was sin-binned for a dangerous tackle on Toby King, who seconds later bamboozled the 12-man defence with his clever footwork to score a solo try.

Despite still being a man short, the Tigers made the game safe with two further tries in a four-minute spell, Turner taking another cut-out pass from Evalds to complete his hat-trick and McShane taking a return pass from Foster to cross the line.

Warrington winger Josh Charnley helped himself to a try as both teams continued to entertain but O’Brien wrapped up the scoring with a penalty.