Richmond coach Damien Hardwick said there is a “strong possibility” Tigers star Dustin Martin will return to the team next Saturday afternoon against Collingwood at the MCG.

Martin returned to training at Punt Road last weekend for the first time since the club granted him indefinite leave for personal reasons in late March, but he did not travel to Perth to face a West Coast side that will field its 12th debutant this season on Friday night.

In a notable omission on Thursday night, Melbourne have lost a fourth player this week to COVID-19 protocols – defender Harrison Petty. He will miss Saturday’s match against Hawthorn. 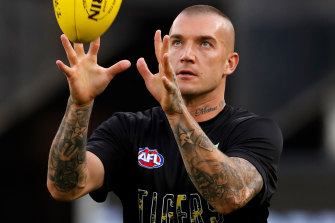 Hardwick indicated Martin would play against the Magpies next week, as had been flagged during the week.

“We watched him move around, he moved fine. But we’d probably be doing us and him a disservice if we put him out there without the preparation,” said Hardwick.

The premiership coach also said the three-time Norm Smith medallist was in “a lot better space” and would not return via the reserves.

Richmond have made five changes to their team to face the Eagles, with co-captain Dylan Grimes and three-time premiership player Kane Lambert set to return.

Grimes has missed the last three matches with a hamstring injury he sustained in Richmond’s 33-point loss against St Kilda in round three.

Lambert will play his first match this season after overcoming a hip injury and returning via the VFL.

Midfielder Thomson Dow will also miss the match due to injury after suffering a corked thigh last round.

Premiership defender Jeremy McGovern will also come into the team, alongside former Blues defender Sam Petrevski-Seton. Midfielder Elliot Yeo will miss the match due to injury. 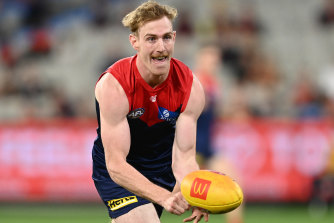 Coach Simon Goodwin will also be forced to coach-from-home due to COVID-19 protocols and will be replaced by assistant Adem Yze at the MCG on the weekend.

However, the Demons will be boosted by the return of All-Australian defender Jake Lever, inside midfielder Jack Viney and forward Tom McDonald to face the Hawks, who will be captained by defender James Sicily in the absence of regular captain Ben McEvoy this week.

Sydney will also welcome back livewire forward Tom Papley for their game against the Brisbane Lions on Sunday, while the Saints will also swap injured ruckman Rowan Marshall for Paddy Ryder as the former Bomber and Port player returns from suspension.