After conceding 97 points to the Adelaide Crows last week and only registering one behind, Greater Western Sydney stunned a lacklustre Carlton at Henson Park on Saturday and put themselves back on the winner’s list with a 17-point victory.

Despite the Blues winning the clearances 27 to 17, they struggled to win the ball or keep possession of it, with only four players registering more than 10 disposals, while the Giants had nine. 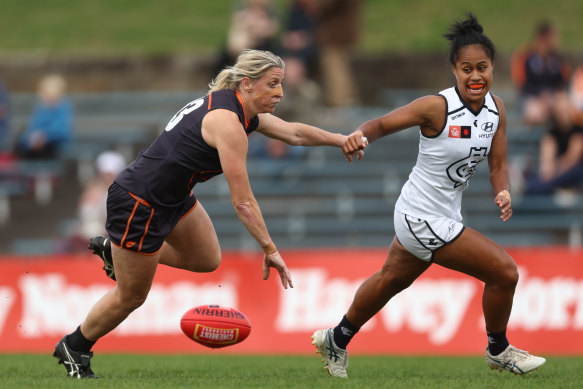 GWS also made the most of their possessions and created avenues to goal with 11 more inside 50s. The scoreboard margin could have been a lot greater if it wasn’t for Carlton defender Vaomua Laloifi, who was matched up with GWS star forward Cora Staunton and kept her to just two goals from a lot more opportunities. After the game, Staunton told Fox Footy Laloifi was “an excellent defender”, who she was put on to nullify. “But it’s all about the result and this team moving forward off the back of a very disappointing result last week,” said Staunton. “It was an embarrassment to our team and our club and we know we needed a response today because that wasn’t [the] Giants last week, this is [the] Giants.”

Cats get first win over the Dogs 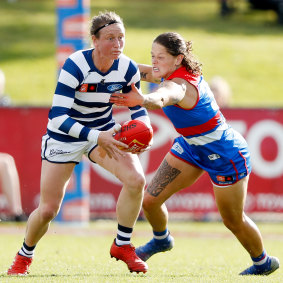 Shelley Scott is tackled by the Bulldogs’ Richelle Cranston.Credit:AFL Photos

Geelong claimed their first win over the Western Bulldogs in the competition’s history on Saturday at Mars Stadium with a one-point victory. The Cats led for the majority of the game and held off a fast-finishing Dogs, who slotted through the last three majors of the day, including one after the siren off the boot of Elle Bennetts. In the absence of star midfielder Georgie Prespakis, captain Nina Morrison was pivotal in the engine room with 21 disposals and eight clearances, and applied the pressure with 10 tackles. Rebecca Webster (17 disposals) and Amy McDonald (15 disposals) both had great games. The Western Bulldogs led in a lot of stats, including possession count, clearances, tackles and inside 50s, and skipper Ellie Blackburn was particularly fierce and dangerous in the contest, while Alice Edmonds consistently beat her opponent. However, Geelong were just more efficient with the ball. Cats coach Dan Lowther said the win “means everything”. “We’ve never beaten the Bulldogs before. I think they’re one of the original teams that have been in the AFLW from the start, so for us to get a win over one of the founding teams is super important,” said Lowther. “Last week against St Kilda, another first, this week [another] against the Bulldogs. We’re just ticking along nicely, which is good.” Both sides now are on 4-2 and are sitting pretty into the top eight, with four rounds to go, and will be on the hunt for a top-four finish. 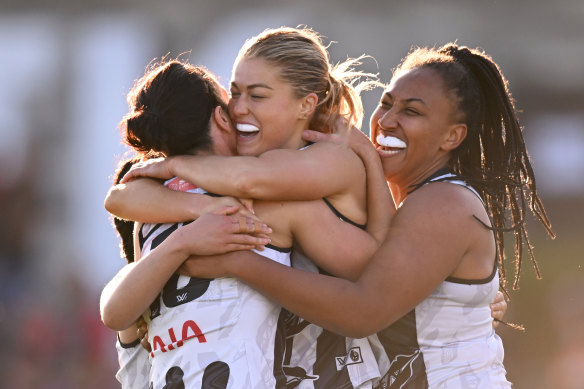 After an arm wrestle for four quarters against St Kilda, Collingwood young gun Eliza James snapped the match-winner for the Pies with just over a minute remaining to give her side a two-point victory. St Kilda’s Nicola Stevens looked to be the one to seal the deal in the dying minutes, streaming towards an open goal, but ran too far without a bounce, forcing a turnover. The Saints went into the match as underdogs and fought hard against an ever-improving Magpies, who are looking like premiership contenders. Mikala Cann (22 disposals), Jamie Lambert (21 disposals) and Ruby Schleicher (20 disposals) are proving their dominance at the coalface, while 20-year-olds Joanna Lin and Tarni Brown brought the pressure, topping the tackle count for their side with nine respectively. For the Saints, Hannah Stuart, who was promoted from the Southern Saints VFLW team this season, was prolific with two goals and 25 disposals. The win puts Collingwood on equal points with ladder leaders Adelaide and looking in good shape for a top-four finish. St Kilda, on the other hand, remain on the cusp of the eight, just one win out of it, with four rounds left and a clash with Carlton next weekend.