Collingwood matchwinner Jordan De Goey will return to the MCG on Saturday as the Magpies attempt to break a four-game losing streak when they play Gold Coast, who have not beaten the Magpies since 2014 and are yet to defeat them in Victoria.

The inconsistent star is among four changes for Collingwood, who immediately recalled inexperienced defender Mark Keane after he served one match of suspension and selected Caleb Poulter to make his debut. Chris Mayne also returns to the team. 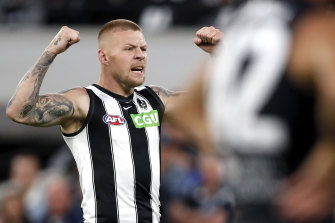 They dropped Jack Magden, Trey Ruscoe, Tyler Brown and Will Kelly with Jay Rantall potentially playing as a substitute after missing Friday afternoon’s VFL match against the Suns, who made no changes to last week’s victorious 22.

De Goey missed the Anzac Day clash against Essendon with concussion after being subbed out early of the round-five match against West Coast when he collided with Tim Kelly’s hip. The star Magpie then found himself in hot water as the club was fined $20,000 when he and injured defender Jeremy Howe accessed their phones in the changerooms while the match was happening after they were ruled out of the match.

Geelong have included Jordan Clark and Quinton Narkle to replace injured pair Mark O’Connor and Jake Kolodjashnij after their dominant win over West Coast while the Swans have been strengthened by the quick return of ruckman Tom Hickey and key defender Tom McCartin. They also named Colin O’Riordan and Dylan Stephens.

The Swans lost Sam Reid to a calf injury, George Hewett to concussion and dropped Braeden Campbell, Kaiden Brand and Nick Blakey as they look to get back on to the winner’s list after two losses.

The Giants were able to include No.1 draft pick Lachie Whitfield for the first time this season after the All-Australian defender overcame a nasty liver injury that forced him out of the first six rounds. Jesse Hogan will play his first match in Giants’ colours. Shane Mumford returns to replace Matt Flynn and Sam Reid also comes in.

Nick Haynes is a big loss as he misses with a hamstring injury while Flynn, Conor Stone, Tanner Bruhn and Jake Riccardi were omitted.

Adelaide dropped key forward Darcy Fogarty and rested Tom Lynch while Will Hamill is out with an ankle injury. David Mackay, Nick Murray and Sam Berry will replace that trio in the selected side.

Last year’s beaten preliminary finalists Brisbane Lions and Port Adelaide will be without important midfielders Lachie Neale and Travis Boak, who are out injured. The Lions named speedy Irishman James Madden to make his debut against Port Adelaide with Rhys Mathieson called up to replace Neale as an inside bull.

Port were able to replace Boak with hard-at-it midfielder Sam Powell-Pepper, who plays his first game for the season.

Keep up to date with the best AFL coverage in the country. Sign up here to our Real Footy newsletter delivered to your inbox on Mondays and Fridays.