Home » Rugby » Luke Beveridge speaks after round one controversy

Western Bulldogs coach Luke Beveridge has addressed the media for the first time since apologising for a post-match outburst at a reporter.

After the Bulldogs’ loss to Melbourne in the season-opening match, Beveridge launched a tirade at journalist Tom Morris, accusing him of “gutter journalism” for breaking a team selection story. Morris was later sacked by Fox Footy for an unrelated matter, after the leaking of audio recordings in which he made offensive remarks about a Fox colleague. 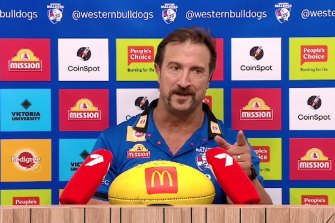 The Bulldogs and AFL endorsed Beveridge’s apology, saying his behaviour did not reflect the club or its values. The Bulldogs will donate $20,000 to charity.

Speaking at his weekly media conference at Whitten Oval on Wednesday, Beveridge said the club was doing well internally, and he was personally fine. He refused to elaborate on the situation with Morris, referring to his apology last week.

“There’s nothing to gain by pouring any petrol [on the situation],” Beveridge said.