A new report has found AFLW players have been required to undertake unpaid weekly overtime, face low levels of respect across club staff and have unequal access to resources, including medical staff and facilities.

Data released on Thursday by the AFL Players Association in the Insights and Impacts Report canvassed AFLW players last season, prior to the recent collective bargaining agreement, and found 83 per cent felt the AFLW program isn’t fully integrated within their club.

Of that, 44 per cent said the women’s program was ‘somewhat integrated’ and that ‘some staff at the club treated it as inferior’. Thirty-two per cent said there was still ‘a long way to go’. 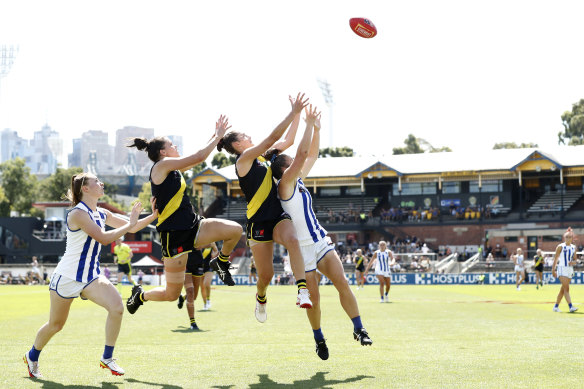 A report by the AFLPA has uncovered challenges faced by AFLW players.Credit:Getty Images

Only 14 per cent of players said their club overall treated the women’s program with the utmost respect, with the AFLPA stating it was concerning that low to extremely low levels of respect for AFLW programs were reported from across the board at club level, including from AFL men’s program staff.

The report found ‘concerning’ figures, including 15 per cent as viewing the AFL senior coach at their club as showing ‘more disrespect than not’ to ‘extremely low respect’ for the women’s program. Only 21 per cent said the men’s senior coach showed ‘extremely high respect’.

Additionally, 23 per cent of players said they found the AFL to view their programs with ‘more disrespect than not’ to ‘extremely low respect’.

AFLPA CEO Paul Marsh said current respect and responsibility and educational training focuses on players but, as issues often come from wider staff, they are “going to put a push for broader education across the industry”.

The AFLPA also recommended a greater commitment across the industry to allocate increased resources to AFLW programs, particularly in the areas of medical and rehabilitation, after 49 per cent of AFLW players rated access to resources as either ‘somewhat sufficient’ or ‘not sufficient at all’.

These resources included the availability of medical staff and physiotherapists at the club, coaching staff, football administrative staff and equipment and facilities. 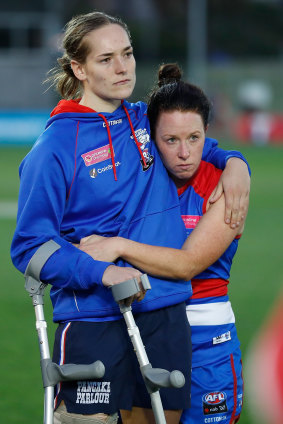 “The resourcing is something that we’re pushing for – so we pushed for that in the CBA we just did and we made some improvements – but more is still needed,” said Marsh.

“There should be no difference in terms of the medical people who are turning up to the AFLW training or playing or games … so that stuff is still not where it needs to be, so [we’ll] continue to push for that.”

Availability of club doctors and access to strength, conditioning and nutrition support was rated as less than sufficient by almost one quarter of players (23 per cent). This is particularly concerning given the high injury rates in the AFLW competition, including ACL injuries.

More than two thirds of players – 71 per cent – claimed they were sometimes required to come into the club on their days off.

Marsh said historically there’s been a big difference between contracted number of hours versus what the players were actually doing, but since the most recent CBA, he’s comfortable this area has been addressed.

“We’ll continue to keep an eye on that but actually the change of CBA and the culture around this is actually changing,” said Marsh.

“I’m very confident it’s a whole lot better”, he added, citing stress levels of players have decreased massively between last season and the current one.

Marsh said they found “a lot of issues in the AFLW program” but that “they’ve come a long way in addressing in the most recent CBA and will continue to obviously improve”.

“The data highlights that there remains much work to do across the industry,” he said. “As we enter a hopefully more normal period post constant COVID interruptions, we expect a greater focus on integration of the AFLW football program at clubs and on appropriate resource availability.”

When it came to the men’s competition, the report found that nearly two-thirds (64 per cent) of AFL players are concerned about the potential long-term effects of concussion, while 5.6 per cent of players are still not reporting concussion and 6.2 per cent have continued to play or train without medical attention after suffering concussion.