North Melbourne have moved to defend their progress under senior coach David Noble after revelations he apologised to the players for the fierce spray he delivered after the club lost to Brisbane in round three by 108 points.

After responding in round four with an 11-point loss to Sydney, the Kangaroos have conceded at least 100 points and been defeated by at least 50 points in their past four games to sit second bottom. Their only win came against a depleted West Coast team and their percentage is just 55.6. 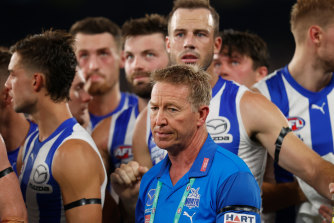 Kangaroos coach David Noble apologised to the group for the spray he delivered after round threeCredit:AFL Photos

Kangaroos CEO Ben Amarfio admitted that recent performances have been below expectations and the team needed to be more competitive than it had been in the past month. The runs of goals against the Roos in recent weeks has caused concern.

“We need to stop these massive runs against us and blowouts, particularly back-to-back, and we need to shut these down obviously, and we want to see our percentage improve,” Armafio said.

He said he and president Sonja Hood had both backed Noble internally and externally on numerous occasions. He said the coach continued to give and receive feedback around performance on a constant basis.

“The coach gets, as we all do, weekly feedback from his staff, from the GM of football, from the leadership group, from the players, from me,” Amarfio said.

He also confirmed that ex-Swans and Demons coach Paul Roos was contributing from afar as a paid consultant of the club along with Gerard Murphy, formerly with Port Adelaide and Geelong, who runs the leadership program.

Amarfio defended the cuts to the playing list, saying the club had determined that its path was the best way to contend for a premiership rather than remaining a middle-ranking club.

“We didn’t go lightly into a rebuild without thinking it through very long and hard about what it would look like, what it means for the club off the field as well, not just on the field,” Amarfio said.

“[We have been] guided by other successful rebuilds … those clubs will tend to spend three or four years near the bottom before bouncing and contesting in finals around the sixth year.”

He said Noble, who has a rolling contract, was one year and eight rounds into that journey, but the club understood why heat was being applied given their recent performances.

“We have had a couple of big losses lately and that is a concern because ideally, we would like our percentage to be higher than where it is at the moment and not be having heavy 40-point losses week after week,” Amarfio said.

No.1 pick Jason Horne-Francis won’t consider extending his time at the club until the end of his first season. He will follow a similar path to another high pick in his management group, Sydney’s Logan McDonald, who extended with the Swans in his second season.

Their first pick in 2020, Will Phillips, played 16 games last season but is yet to appear in 2022 after glandular fever interrupted his pre-season. Tom Powell has played just four games after an outstanding debut season, while forward Charlie Comben has played just one game, in 2021. 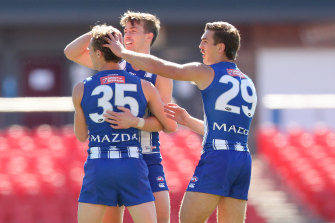 He said there was no doubt the team needed to improve and members were justified in expecting a better performance.

“Our members believe in our strategy and they believe in the long-term approach that we are taking. Are they frustrated? Absolutely, so are we, but we need to turn that around,” Amarfio said.