Mark LoGiudice has announced he will step down as Carlton president at the end of 2021, with the Blues board on Monday night unanimously voting Luke Sayers as his successor.

In a statement to club members on Wednesday morning, LoGiudice said the club had been involved in succession planning for some time. LoGiudice has been Carlton president for eight years. 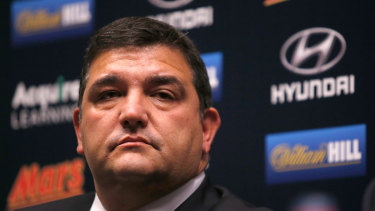 “I am writing to inform you that after 12 years on the Board of the Carlton Football Club and eight of those years as president, my tenure will conclude at the end of 2021,” LoGiudice said in the statement.

“For some time, with the guidance of the independent nominations committee, the board has been in the process of succession planning. It is with great pleasure that I can now announce that the board has unanimously elected Luke Sayers as president-elect, which was determined at a board meeting on Monday night.

“Luke Sayers is a well-regarded business leader and has been a director of the club since 2012. He is the executive chairman of Sayers, a Melbourne-based investment and advisory company, and prior to that the CEO of PricewaterhouseCoopers for eight years. In 2019, Sayers was made a Member of the Order of Australia for his significant service to business, to people with a disability, and to the community.

“My priority now remains to ensure a smooth transition during this period.”