Carlton football department chief Brad Lloyd has defended high-priced recruits Adam Saad and Zac Williams, and does not believe the Blues’ on-field struggles will have any impact on Patrick Cripps and Harry McKay agreeing to new contracts.

The Blues are in damage control in a season where they have slipped to a 4-8 win-loss record, and have lost all seven matches when facing top-eight teams.

The latest loss, by 22-points against the West Coast Eagles at the SCG on Sunday, was particularly worrying, for the Eagles had several blue-chip stars missing. 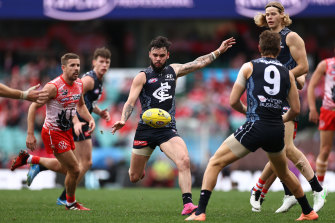 Zac Williams in action during round 11. Credit:Getty Images

That defeat has heaped more pressure on coach David Teague, who replaced Brendon Bolton in round 12, 2019 on the back of strong player and fan support, particularly over the team’s perceived inability to embrace a selfless attitude and defend as a team, something Ed Curnow told The Age on Friday needed improving.

Their defensive issues have been highlighted in that they have conceded at least 94 points in their eight losses, of which five have been by at least 100 points.

Positional changes have been made, including the shift of co-captain Sam Docherty from half-back to a wing, and on Sunday the hard-working Curnow into defence on Jamie Cripps, but prominent recruits Saad, traded from Essendon in exchange for pick No.10, and Williams, a former free agent, have had mixed campaigns.

The rebounding Saad cannot be relied upon to be a lockdown defender, an issue he had when with the Bombers, while Williams has returned to half-back, having struggled as a frontline midfielder. Regardless, the Blues have been torched by an opposition small forward on a weekly basis.

Lloyd said Saad and Williams “had made really good contributions” but would prosper in a side with greater evenness.

“Both have had games where they have really impacted … I feel like when we can get the side up and running and a more even contribution across the board, you are going to see more from them,” Lloyd said.

“We couldn’t be happier. They are class AFL players and they are going to offer Carlton supporters a lot over the coming years.” 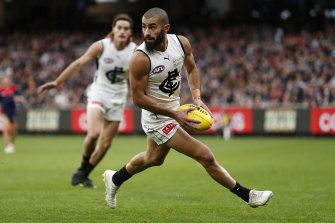 However, Lloyd admitted communication, organisation and personnel had been an issue in defence.

Co-captain Cripps, off-contract, and his management have been formulating a four-year extension, while McKay, the key forward in All-Australian form, is set to open negotiations soon.

Lloyd said he was not concerned that the Blues’ on-field woes would make Cripps and McKay reassess their futures.

“Being on the inner workings of it, no, I am not concerned at all. Cripps’ [negotiations] has been going along quite nicely but it was announced prematurely from a media point of view the other week,” Lloyd said.

“It wasn’t quite at that level but we have been ticking along and we are at a pretty good level there that we are working through. Harry as well – we are tracking along pretty well.”

The Blues have the bye this weekend but tough selection calls then await, not to mention a sharper focus on the trade and draft periods.

Former skipper Marc Murphy has become a lightning rod for supporters. At 33, he is averaging 15 disposals per game in a season which shapes as his last and when he was asked to fill a new role up forward. He is five games shy of becoming only the sixth Blue to make 300 matches, and the Blues know they must handle him respectfully.

“As it stands at the moment, we are picking the team on form and he was the sub the other week but he is back in the team at the moment,” Lloyd said.

“Everyone would love to see him reach that 300-game milestone but we are also conscious of week to week and wanting to win games of footy. It’s hard to put guarantees in for these things but knowing Murph, he is a wonderful player and he still has a lot to offer the team, so there is plenty of the season ahead and he will get plenty of opportunity to hit that milestone.”

Past players who spoke to The Age on Monday were frustrated with what is perceived to be a lack of mental and physical toughness.

Lloyd said the Blues needed to continue to invest in their development program under Luke Power but said progress was being made, pointing to Paddy Dow’s strong effort against West Coast, the emergence of Matt Owies and the maturation of Sam Walsh, Jacob Weitering and McKay.

* Across the season, the Blues are the fourth-oldest team (average age 25.8) and the fifth-most experienced (95.6 average games).

Since the Blues last made the finals in 2013: