Home » Rugby » Lions down Saints in battle of walking wounded

The Brisbane Lions have hit back after successive losses to eke out their 10th win of the season, downing a brave St Kilda by 21 points in a scrappy, stop-start match in which both sides were hit by injuries.

St Kilda, however, bore the brunt of the bad luck, losing Mitch Owens and then Daniel McKenzie to separate concussions either side of half-time, then Zak Jones to a hamstring injury, making their task next to impossible. 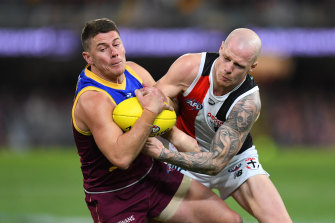 The Lions’ Dayne Zorko is tackled by Zak Jones. Both players were injured.Credit:AFL Photos

The Lions had their own troubles: captain Dayne Zorko had also hobbled off with a tight hamstring in the third quarter, replaced by ruckman Darcy Fort, a bizarre choice of medical substitute. Darcy Gardiner also finished on the bench with a back injury.

But it was the unlucky Saints who ran out of legs, and the final margin may, if anything, have flattered the home side, who were coming off six-day break and look desperate for the bye. It wasn’t a convincing win, but they’ll take it against top-eight opposition.

Hugh McCluggage was the best player for the Lions all night, keeping his head when everyone else was losing theirs. His 33 possessions and seven clearances were a cut above. For the Saints, Seb Ross and Brad Crouch were typically tireless.

The first half was a grind, with the Saints dominating the early exchanges without punishing the Lions on the scoreboard. The home side looked stricken with self-doubt, unable to get any flow in their ball movement. 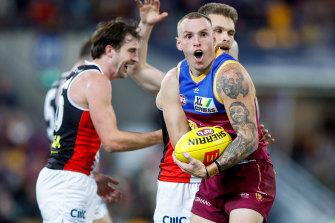 But the most valuable player for either side in the first half was the umpires. Of the eight first-half goals, six came from free kicks. There was no real arguing with any of them, either – not without giving a 50 away, anyway.

The Saints took a two-goal lead into half-time, but losing Owens and McKenzie either side of the break took its toll, and the Lions began to find a way, Joe Daniher kicking his second goal from a big mark.

Brandon Starcevich and Mitch Robinson also benefited from free kicks, while Zac Bailey scrambled a goal from nothing. McCluggage was also extremely unlucky to have a goal overturned on review when players and umpires alike had returned to the centre.

The review sucked away a little of the home side’s momentum, and the Saints hung in. Jack Higgins’ tireless running was rewarded with his first major, and Jade Gresham kept them within three points at the last change.

McCluggage broke the game open with a brilliant running goal from a chain he started from the wing. Still, St Kilda wouldn’t go away, Dan Butler hitting back to keep the Saints within a kick.

But, finally, they began to run out of legs, with the ball camped down the home side’s end as the last quarter drew on. Daniher kicked his third from the goal line, enough to open up a gap the Saints couldn’t bridge at the Gabba fortress.