Key forward Jacob Koschitzke threw his name up for a round-one debut in Hawthorn’s win over North Melbourne in the Community Cup series on Saturday.

Koschitzke, the cousin of retired St Kilda star Justin, kicked six goals and three behinds while pulling in some strong marks as the Hawks controlled the majority of the game to claim a 39-point win at Arden Street Oval. 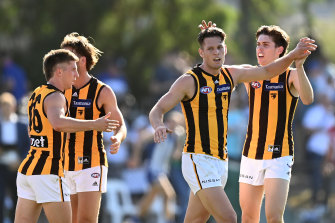 Jacob Koschitzke is congratulated by teammates after kicking one of his six goals for the Hawks on Saturday.Credit:Getty Images

The third-year Hawks forward was drafted as a key defender but has trained as a forward during the off-season and made some smart leads into space for his marks, while his kicking action looks fundamentally sound.

Hawks great-turned Fox Footy commentator Jason Dunstall said Koschitzke should be considered for selection given the team’s need for another target man.

“I’d be amazed if we didn’t see him [in round one],” Dunstall said during commentary.

Hawks onballer Harry Morrison ran rampant as did Liam Shiels and James Worpel, while recruit Tom Phillips showed good signs with his run and ball use, as did running defender Changkuoth Jiath. 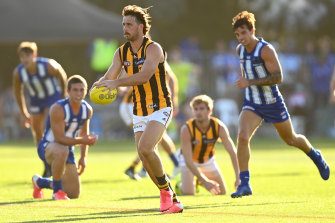 Tom Phillips gets a kick away for the Hawks on Saturday.Credit:Getty Images

The Roos had few winners but Luke Davies-Uniacke, Jack Ziebell and Jaidyn Stephenson had their moments, while first-round pick Tom Powell had 16 possessions in the first half and Josh Walker had five marks and kicked three goals.

The Hawks made the most of their opportunities in the first term, surging forward and hitting their targets, with first-year forward Tyler Brockman kicking three of his club’s six goals for the term as they set up a four-goal lead.

When the Roos were in the forward half they showed some glimpses, although one of their goals came from Hawks player Daniel Howe stepping off the mark and conceding a 50-metre penalty which Davies-Uniacke converted.

But North worked back into the game in the second term, reducing their errors and finding more of the football, which resulted in a couple of tidy entries with Walker, Nick Larkey, Curtis Taylor and Kayne Turner kicking goals.

But the Hawks managed to push the ball forward late in the quarter and they twice found Koschitzke who kicked two late goals, including one on the siren to take a 16-point lead into half-time. 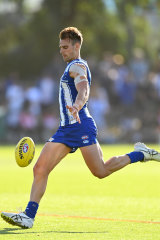 Dom Tyson was back in action for the Kangaroos.Credit:Getty Images

Koschitzke continued to thrive in the third, kicking three more goals, two with set shots and his sixth a toe-tap from close range.

The Hawks had few challenges as fatigue slowed both sides in the last term, with Phillips becoming more involved as players tired and space opened up.

The Roos gave top draft pick Will Phillips a run late in the game. He was wearing the number 29 made famous by Brent Harvey.

In the final minutes, Koschitzke ran back with the flight of the ball and punched it clear to stop a North Melbourne mark. If his goals don’t get him a game, perhaps his hustle will.

The Hawks were without several regulars, including Tom Mitchell, Jaeger O’Meara, Jack Gunston, Chad Wingard and Luke Bruest, while Mitch Lewis was a late withdrawal.

So the match was a good test of their depth players and newcomers like Tom Phillips, Kyle Hartigan, Connor Downie, Brockman and Koschitzke spent more time on the field and showed they could fill bigger roles. Jarman Impey was also in his polo shirt for the second half, although that appeared a planned move.

Dom Tyson showed he could do a job for the Kangaroos, winning 23 possessions and kicking three goals. Tyson, aged 27, has had his battles with injury and form since moving to the Roos in 2019, playing just three games but he moved well and looked suited to his role on Saturday.