Collingwood president Mark Korda has told the club he will stand down as president after the annual general meeting in December, but will stay on the board for the final year of his term.

He will remain as president until the meeting, but in an acknowledgement of the political reality at Collingwood will not nominate to be voted back in as president by the new board, which will be chosen at the AGM. 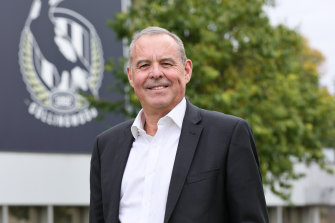 Mark Korda will not be Collingwood president next year.

Korda, who has been a respected and liked board member but unpopular president, had already announced that he would step away from the board at the end of next year.

Recently, Collingwood board members called on him to bring his departure from the board forward by 12 months as a circuit breaker to create a vacancy that would help a peaceful transition to a new board led by Jeff Browne.

Korda had said he wanted to stay on as president and serve out his term. He has now accepted he will not be president next year.

The move came as the club was poised to confirm three challengers for board positions at the coming annual general meeting; Browne, Barry Carp and Renee Roberts.

Carp is the wealthy founder of venture capital firm River Capital, while Roberts is an APRA executive.

Four of the seven current board members were to face an election at the annual general meeting: Peter Murphy, Christine Holgate, Neil Wilson and Bridie O’Donnell. O’Donnell has since quit and the board will not offer an endorsed candidate for her vacancy at the election.

Holgate, Wilson and Murphy have until November 4 to declare if they will seek re-election.

Holgate has been endorsed by Browne to remain and will form part of his four-person ticket at the election. It is uncertain if Wilson will contest the election, though this was considered likely.

Board members had urged Korda to bring forward his plans to leave the board by 12 months in order to create an extra vacancy. Korda resisted that call last week but has since accepted he would not be supported as president next year.

Murphy has indicated he would be unlikely to contest the election if that meant a more peaceful transition of power.

Murphy, who was co-president with Korda immediately after Eddie McGuire’s sudden resignation, has strong support in the club’s administration and the board.