A year after injury cruelled his Olympic dream, the son of a Sydney Rooster has powered Australia to a drought-breaking extra time win over New Zealand at Twickenham.

“Just stoked, just over the moon, it was a full team performance, we all chipped in and luckily we got there right at the end,” Paterson said.

The win caps a resurgence in form for both Australia’s sevens teams just in time for the Commonwealth Games in Birmingham, England, in July. 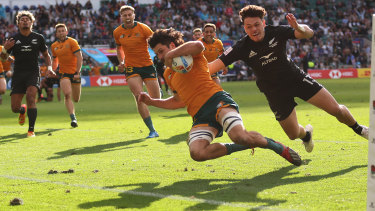 Paterson scores his third try to seal a golden point win for Australia in the Cup final of the London Sevens.Credit:Getty

Madison Ashby, Faith Nathan and Rookie of the Year Maddison Levi rounded out the Australians in the Dream Team line-up.

But it was Paterson’s heroics that grabbed the limelight on Sunday and deservedly so. After withdrawing late from the Tokyo Olympics due to injury, Paterson had to fight his way back into the squad, returning in January.

He now looks impossible to shift, after scoring all of Australia’s tries in the final and making a superb tackle on New Zealand’s Caleb Tangitau to send the game to golden point.

Paterson, who was cut by the Roosters as an 18-year-old before turning to rugby, was a lethal link in a cohesive Australian attack, with teammates Cory Toole, Nathan Lawson, Josh Turner and Ben Dowling all playing decisive roles in the win.

It may not even have been Australia’s best performance, after the John Manenti-coached side fought back from a 17-0 deficit against series leaders South Africa to claim victory in the quarter-finals.

Again, it was Paterson who starred, scoring a double to get Australia back into the game before captain Nick Malouf produced a game-winning turnover to seal it.

An emotional Malouf said after the final the win was inspired by a “tradesman-like performance”.

“We spoke about getting to work today, putting in a tradesman-like performance, and some of the efforts, all over the field, throughout the day, just can’t be prouder of everyone’s efforts,” he said.

“We’ve worked so hard for this and I’m just glad we finally got the reward that I feel like we’ve deserved.”