Home » Rugby » Kikau the code-hopper? NRL star would be in a league of his own as a Wallaby

I might be out of line by saying this as a member of the rugby fraternity, but I really like the NRL as a product and have immense respect for our friends in rugby league.

I strongly believe the two codes can happily co-exist. I believe rugby should accept there are many things it can learn from the NRL in terms of product delivery. What is certain is rugby can’t compete financially with league in terms of signing the best kids out of school. 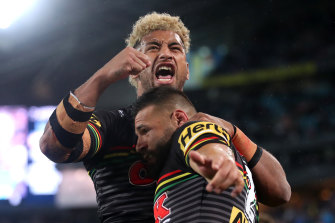 When Kikau hits the ball up, he is a seriously hard man to bring down and regularly has two or three defenders working overtime to stop him. His height would be handy and I’d love to see what he could do in rugby.

My gut feel is that he’d be a No.8, playing alongside a hard-working No.6 to go with a ball-fetching No.7. That’s a tantalising back row.

Something tells me Dave Rennie would like what Kikau is about, too. 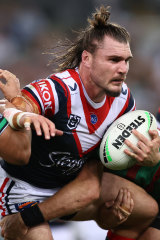 In time, Angus Crichton might feel he’s achieved it all in rugby league and want a fresh challenge. Credit:Getty

It’s been well documented that Crichton has a background in rugby. A Scots College boy, Crichton played three years of Aussie schoolboys, so knows the feeling and shape of the game.

He is not too far into his rugby league career that he couldn’t be lured back to the 15-man game. The attraction of rugby for Crichton should be its larger global platform.

Crichton has done well in State of Origin and been a dependable figure at the Bunnies and Roosters. I know Crichton said this month he was keen to stay at the Roosters, but Rugby Australia should keep at it. In time, he might feel he’s achieved it all in rugby league and want a fresh challenge.

I’d have him in the back row, as a No.8 or No.6. I’m not entirely sure he’d have the agility to go straight into the midfield yet. He could be a genuine Wallabies option at the 2023 World Cup. 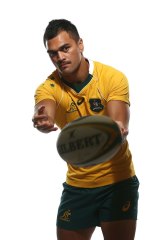 I know Hunt represented the Wallabies six times and was at the Reds and Waratahs, but I don’t know how rugby lost him. The Waratahs surely can’t enjoy seeing him run around for the Broncos’ feeder team Souths Logan in the second-tier Queensland Cup.

He is 34, but rugby should have got so much more out of him. He’s a big presence and an excellent decision maker. I wish he was still in the Waratahs’ set-up as a leader, because they are seriously short on experience. Imagine if he had another year helping Will Harrison and taking some responsibility off him.

I really rated Hunt and have no doubt he could still make an impact in rugby but, sadly, it’s probably too late.

He’s got some Folau features about him, in terms of his physique and leap. I like the aggression Tupou possesses and he has a knack of beating guys on the outside.

Rugby needs A-grade finishers. He could feasibly play in the centres, on the wing or even at fullback, depending on the balance of your team. Koroibete, Vunivalu … keep them coming.