Home » Rugby » Johannisen speaks up, for his daughter

For years, Jason Johannisen didn't want to say anything. He'd been born in the dying days of apartheid-era South Africa, but hadn't experienced racism first hand. Having moved with parents Eldrid and Sonya to Western Australia when he was just seven, Johannisen considered himself one of the lucky ones.

But then George Floyd was killed, the Black Lives Matter movement catapulted into worldwide consciousness, and Johannisen, softly spoken and gentle, felt it was the right time to speak up. 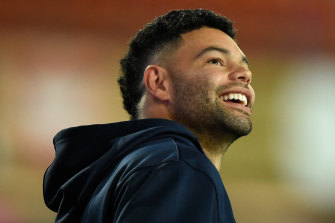 Jason Johannisen is using his voice to promote equality.Credit:Getty Images

"There's always that 1 per cent that just don't get or just don't care. Which is frustrating. Especially on social media and stuff like that, because people just don't care about social abuse and the effects it has on people. It's an ongoing issue but I do feel like it's moving forward, slowly," Johannisen said.

Johannisen attributes part of his desire to make a difference to the fact he is now a father. His partner Logan gave birth to daughter Lola last November, and Johannisen wants a better world for his little girl.

"You see all the abuse that some people have copped over the recent years, and you just don't what that to happen to your daughter. You want a life where your daughter doesn't have to worry about being abused online, or racially or whatever. And that's the ultimate driver for change, because you don't want the future to go through that."

Lola probably won't remember it, but she's been living through an incredible year for the world, and for football. She's been up in the Bulldogs' Queensland hub with her parents. 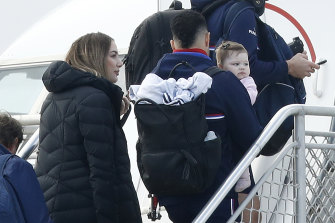 Jason Johannisen and his family head out on the AFL’s July exodus to Queensland.Credit:Getty Images

"To be honest, I thought it would be a lot harder. We're pretty lucky, Lola's a pretty good sleeper and she's a pretty happy baby, and she's a bit of a favourite amongst the Doggies people. Pretty blessed to have such an easygoing baby," Johannisen said.

"It's pretty special watching all the little kids grow up and spend time together. Everyone's sort of gotten a lot closer … because we've been through so much in the past three months."

Among the bonding experiences have been several fantasy football drafts, which help take the Dogs' players' minds' off hub life.

But there is no fantasy about the equation facing the Dogs, with finals football beckoning again.

The 2016 Norm Smith medallist will be 28 in November, but there is no sense that he is willing to rest his laurels on the famous events of four years ago.

"Whenever any player gets that taste of success, you sort of go crazy wanting another one. Our mindset's still the same, to win another premiership. And not make the club go through another drought where you have to wait another 60 odd years," he said.

Johannisen made his name as a dashing half-back flanker, and while he still has that string to his bow, he has been comfortable changing gears.

"My role this year's been slightly different, a bit more defensive in the first half of the year, especially with Caleb Daniel being so good with ball in hand. I probably sit back and have more of a defensive role, and just lately in the last couple of weeks moved up the ground and played a bit of midfield and forward time. As a team we've noticed we could probably do with some speed on the wings and in the forward line. Personally I'm happy playing anywhere."