St Kilda will not offer Jake Carlisle a contract for 2022, with the 29-year-old expected to retire having played just four games this season after having back surgery in May.

The intercept marking defender played 66 games for the Saints after being traded from Essendon at the end of 2015 where he played 85 games. 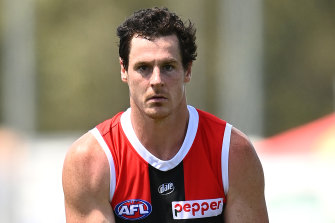 He missed 2016 due to the suspension imposed on players that were at Essendon in 2012, when that club ran a supplements program, but finished fourth in the Saints best and fairest in 2017.

Fremantle have moved on utility Reece Conca, informing the 29-year-old his contract would not be renewed beyond this season. Conca played 46 games with the Dockers after 104 games at the Tigers.

He left Richmond at the end of 2018 having played in the club’s preliminary final loss that season but was not part of the drought-breaking premiership in 2017 after suffering a Lisfranc injury early that season.

Gold Coast’s Jarrod Harbrow also announced his retirement. The former Western Bulldog was one of the expansion club’s inaugural players. He retires as the Suns’ first life member after playing 191 games with the club following 70 games with the Bulldogs.

He was a brilliant rebounding defender with a sharp sidestep and is regarded as one of the Suns’ most influential players.