I’ve never been as excited for a State of Origin series as this year. It feels like there’s an edge to this year’s contest as things slowly go back to normal.

Even walking around the streets of Coogee and at home, it seems like everyone is re-energised. Having three games in different states, including the second match in Perth, gives it a sense of normality.

Everyone is expecting to see a couple of heavyweights go at each other as hard as they can until the end. That’s certainly what I’m expecting too. I can’t see it being any other way. It’s going to be so great to play back in front of a capacity crowd at Accor Stadium in Sydney, the first time since James Tedesco scored the last-minute winner in the deciding match of the 2019 series.

Queensland will be a different team this year. They’ve chosen players from teams sitting at the top of the ladder in the Cowboys and Broncos, and they’ll be a formidable challenge.

There’s been a lot of talk about our new rookies coming into the NSW side in Kotoni Staggs, Stephen Crichton and Ryan Matterson. There’s nothing better in this role than giving young blokes a chance to step up and go to the next level. Listening to past players we’ve had address the group over several years, they tell them there is no better place to do it than in Origin. We’re in that mood now. 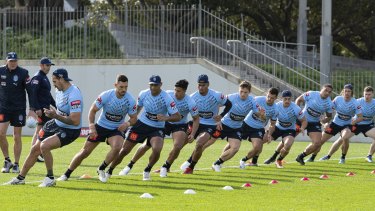 The Blues train under the watchful eye of coach Brad Fittler.Credit:Helene Cochaud

I’ve known most of our Origin debutants for a number of years. I knew Kotoni as a young bloke, but he’s been in Queensland for a while with the Broncos and I’ve just watched him from afar. We picked him just as much for his defence as what he can provide in attack and I’m really excited about his match-up with Valentine Holmes.

He spoke about dealing with pressure and jumping into the Octagon and having all those eyes on him in combat.

Stephen Crichton and Ryan Matterson have been a part of the group before. Most of the players these days are pretty good. When they come into camp, they’re always open and they realise the standards they have to uphold. They’re a group of non-complainers. They get on with it and get s— done. The current blokes trust the coaching staff, and we trust them.

We’ve had to quickly adapt to the injuries to Tom Trbojevic and Latrell Mitchell. But we’ll just be playing to where our assets are and where we feel we’re strong. Having a full-time fullback playing in the centres in Trboejvic allowed him to roam and bob up anywhere on the field. He just knows where the ball is going to be, but we’ll be playing to what we consider our strengths.

We had UFC champion Alexander Volkanovski address the squad earlier in the week and I was incredibly impressed by him. His story is an awesome one. The old front-rower for the Warilla Gorillas who switched sports and just refused to give up. He spoke about dealing with pressure and jumping into the Octagon and having all those eyes on him in combat. As a group, we talk about dealing with pressure constantly.

On another note, it’s sad that my old mate Ray Warren announced his retirement from calling matches during the week. He obviously knows, for whatever reason, it’s the right time.

It was always going to be his decision. No one gets to call 99 Origin matches if you’re not without peer in what you do, and his voice has made Origin so special over four decades. I feel so privileged to be part of his era. But it gives a chance to Matt Thompson to call his first Origin and he’ll do a wonderful job.

Watch the State of Origin series exclusively live and free on Channel 9 and 9Now.