Home » Rugby » ‘It’s what she wanted’: Foran opens up on late fan’s hope for his Sea Eagles return

Kieran Foran is being strongly linked with a return to the Sea Eagles, but Manly have moved quickly to deny suggestions they will be given outside help to bring him back to the northern beaches.

The Sea Eagles have had to fend off suggestions that the passing of much-loved supporter Brenda Duchen would result in Foran’s homecoming being fast-tracked. Duchen was a huge Foran fan and backed him as a sponsor when he was at the club from 2009-15. 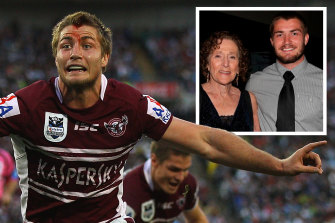 Manly refused to comment on my information that Duchen’s family was about to make a donation to their foundation. They say those dealings are confidential, but made it clear any donation would not carry a caveat that Foran must be signed.

‘‘First of all, I want to say that Brenda was a hugely respected and loved person at our club and we would like to honour her in an appropriate way,’’ Manly chief executive Stephen Humphreys said.

‘‘What transpires between her family and the club is confidential. We do not comment on who donates what to our foundation. That’s between the individual and the club. What I will say is that there is no link between anything that may happen and any player being signed by our club. That can’t happen.’’

Duchen was a highly respected figure in the legal fraternity. She had close relationships with Foran, Api Koroisau and Dylan Walker.

Foran this week paid tribute to her on Instagram.

‘‘I want her family to know how much I respect her,’’ he said. ‘‘We always talked about me going back to Manly and she would ask me all the time if I could make it happen. Obviously if things fell into place and I ended up there again she would be in my thoughts every day I was there. I know it’s what she wanted and of course the move has appeal to me. I don’t know if it’s possible. It would be a lovely way for me to honour her memory and her contribution to my life.’’

The pending departure of Addin Fonua-Blake will free up room in the Sea Eagles’ salary cap for Foran to finish up at Manly, but a deal is yet to be struck.

The bunker is such a headache for the NRL that officials have privately floated the idea of utilising the views of its biggest critics – television commentators such as Phil Gould, Paul Gallen and Andrew Johns – to help officials make decisions.

The discussion has been held internally and was raised by NRL head of football Graham Annesley. But with Peter V’landys in charge, the focus is on ramping up technology and reducing the number of voices in the bunker.

It’s something I’ve heard externally, but we need to go the other way and remove the voices.

The latest moves to restore the bunker’s credibility – cutting back to one official – are high risk. Tapping into TV commentary to avoid howlers is something Annesley liked the idea of, but it won’t happen.

‘‘It’s something I’ve heard externally, but we need to go the other way and remove the voices,’’ V’landys said. ‘‘My view is the way we need to move is towards a greater reliance on technology. Things like Hawkeye are changing all the time and we need to be at the cutting edge. We will review the technology and develop that area.’’

Annesley was clearly frustrated this week when the bunker denied Roosters prop Lindsay Collins a try in their game against the Knights. The bungle occurred when the senior review official in the bunker and his assistant – a former player – could not agree on the decision. So Annesley dumped ex-players from the bunker. It is a high-risk strategy that will heap more pressure on officials who make the wrong call.

Many believe a better strategy involves three officials reviewing contentious decisions to ensure the worst-case scenario is a 2-1 verdict. Another model discussed at the NRL entails somebody listening to the TV commentary and giving the official a ‘‘heads up’’.

‘‘The experts don’t always get it right in commentary,’’ V’landys said. ‘‘In fact, I think the bunker criticism is over the top. It gets the right decision 99 per cent of the time.’’ 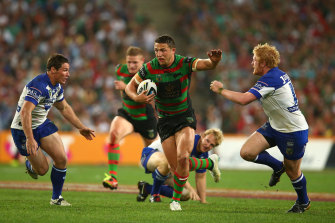 The potential return of Sam Burgess is fraught with issues.Credit:Getty

But the idea carries a fundamental flaw: when he left the NRL at the end of last season, Burgess signed a document stating he would never play professionally again. The mere suggestion has prompted a backlash from clubs.

There is also another can of worms that could be opened around his retirement and the way it happened if Souths start to push the envelope. Stay tuned.

The Joseph Suaalii story has a life of its own. At 17 he is a walking headline, as league and rugby do battle for his services while he completes his year 11 exams. It makes for uncomfortable reporting but the money, hype and talent put him on the radar of every media outlet. His family was criticised because someone advised them to try and insert clauses into the deal he is negotiating with Souths and Rugby Australia that would allow him to leave whenever he wants.

As Paul Gallen said on 100% Footy, it’s the kind of demand befitting Sonny Bill Williams. Wayne Bennett wasn’t happy and confirmed the clauses are a stumbling block. Souths believe the Olympics are Suaalii’s goal. One club insider told me he needs to tell them which sport he wants to play before they can make another offer.

The delay in the interview process for the Broncos coaching job has led to all kinds of stories. The most interesting suggestion to come my way is Stephen Kearney to be an interim coach next year, followed by Craig Bellamy in 2022. It’s hard to think the Broncos would want to sacrifice a year, and Bellamy has said 2021 will be his last. But rugby league is full of odd happenings and if you can get Bellamy it may be worth burning a year.

Fox Sports gets a lot of things right with its NRL coverage, but last Saturday night it dropped the ball during the pre-game tribute to Joel Dark. He lost his life a few days short of his 20th birthday playing the game he loved. It devastated his famous cousin, Australia, NSW and Roosters captain Boyd Cordner.

The way Fox trained a camera and zoomed in on Cordner’s face during the minute’s silence was, at best, poorly thought-out. At worst it was trying to exploit a man during a moment of genuine pain.

The camera was on Cordner in the hope Fox would capture a tear. The same image was broadcast on the big screen at the SCG, so Cordner could see himself in pain.

There were 25 other players on the field. Not one other was shown. The silence was for Dark, a Newcastle Knights junior. He died from a head knock suffered playing in the Newcastle competition. The Roosters were playing Newcastle.

We get that Fox Sports wanted to capture the emotion of the moment, but there is a way of doing it that allows all involved to retain their dignity. They could have shown the shot of Cordner on replay.

It was ghoulish. I felt so uncomfortable for Boyd.

It would have had the impact they wanted and it would have appeared more respectful.
As one of Cordner’s inner circle said to me: ‘‘It was ghoulish. I felt so uncomfortable for Boyd. I didn’t want to bring it up when we spoke because he’s had a difficult week.’’

I spoke to some of Fox Sports’ on-air talent about the coverage and they said they were uncomfortable. Yes, I work for Nine – the owners of this masthead – and my view will be dismissed as an agenda. Only a brave Fox employee would publicly raise their concerns.

‘‘Emotion plays a major role in professional sports and our audience shared Boyd’s tragic loss,’’ Fox’s executive director Steve Crawley said. ‘‘He is a powerful, much-admired public figure and I think that minute’s silence drew everyone closer to him. When he set up the first try, I think even opposition fans felt good for him and when he banged his head and had to go off … that was sad. I’m not saying we were right or wrong, I’m just saying we told the story as it was.’’

Fox’s tabloid approach to the way it covers the sport is entertaining and can be informative. But it should leave the tabloid style for its magazine and panels programs, not the game coverage.

It was a difficult night for Cordner, but his tough mindset shone through, as it does whenever he plays. He was all class and started the game with vigour and power, as if he was making a point or dedicating himself to his younger relative, who he loved so much.

And Joel was on his mind after he suffered the head knock that resulted in him leaving the game. After passing all of his concussion tests, Cordner started talking to the Roosters doctor about his family, not the game. At that point the doctor rightly ruled him out of the match as he knew he was not in the right frame of mind to play on.