Home » ‘It would be insurmountable’: Players to head home if hubs return

Senior players and support staff at three of Melbourne’s biggest clubs have told their employers they will return home if Victoria extends its lockdown beyond this week and clubs have to spend an extended period on the road.

The AFL is scrambling to keep the 2021 season moving, rescheduling games away from Victoria to avoid entire teams being locked down and unable to travel. 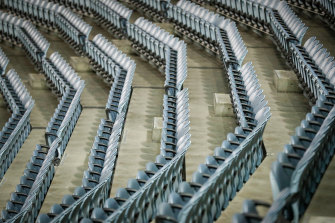 With Victoria in lockdown, the stands were empty at games in Victoria in round 11 and teams have had to hit the road to keep the season going.Credit:Getty Images

But many staff members, including several senior players, have told their clubs they would have to return home if they were expected to be on the road for weeks at a time.

A senior player from a Victorian club, who spoke to The Age on the condition of anonymity for fear of being perceived as complaining, said both players and staff felt uncomfortable about the prospect of more time away from home at such short notice.

“We were given six hours to organise our lives and then jump on a plane,” he said.

“We have players with young children at home and some of them don’t have a large amount of family support, so it would be insurmountable if it lasts much longer.

“We have to think about our support staff as well. They are still on pay cuts from the soft cap reduction and they’re not paid anywhere [near] what we as players are, yet they’re still expected to make a lot of the same sacrifices.”

Victorian players were forced to spend much of the shortened 2020 season in hubs in Queensland and Western Australia in order to keep the season alive.

An extension of Victoria’s lockdown – currently due to finish on Thursday night – could force the league into a similar scenario, although league boss Gillon McLachlan made it clear to club CEOs in a phone hook-up on Monday that the AFL would do everything in its power to avoid that.

“The difference is, we thought we had an agreement with the AFL regarding the ability for families to join us in the hubs last year, otherwise we wouldn’t have gone. We weren’t given that option at all this year,” the player said.

Another player from a separate Victorian club, who asked not to be identified, said he was aware of several of his teammates who had told the club they would have to return home soon.

“For people like me, it’s not that big an issue. But I don’t have a young family at home, so I completely support them and their needs,” he said.

“At this stage the plan is to return to Melbourne after this weekend but I can’t see that happening.”

Club football bosses are aware of several of their key players wanting to go home soon, but several clubs don’t believe that in itself will threaten the continuance of the season. It will, however, test the depth of club lists, as it did in 2020.