Israel Folau has been forced to watch on as the cold reality of his return to Australian sport was hammered home in his team’s 88-0 loss.

The code-hopping star squirmed in the stands as his Burleigh Bears were trounced.

The 32-year-old is still in limbo with the Queensland Rugby League refusing to register his contract unless given clearance to do so by his UK Super League club Catalans.

At a press conference last week, Folau announced he was making a comeback to rugby league Down Under after signing with amateur club Southport Tigers in the Gold Coast’s A-Grade competition. 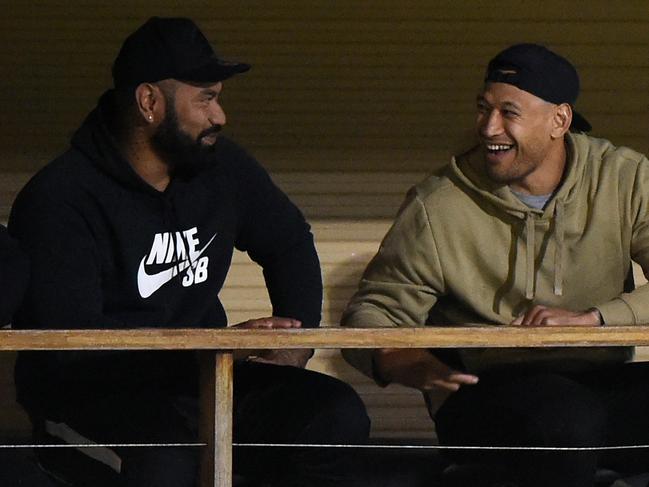 Clive Palmer is backing Folau’s move to Southport, but the deal still needs to be ratified by the QRL. The mining magnate threatened to issue a Federal Court injunction against the governing body for religious discrimination if it didn’t give Folau the green light.

Catalans Dragons, meanwhile, are also contemplating legal action of their own

Israel Folau’s UK Super League club is reportedly contemplating legal action as a result of Folau still remaining under contract until the end of the season. Palmer again made a show of public support for Folau this weekend when they watched the team’s humiliating defeat on the Gold Coast together.

Folau was spotted sitting alongside former NRL star Tony Williams who had his contract with the New York Freedom in the NARL torn up over disgraceful comments directed to the victim in Jarryd Hayne’s sexual assault case.

Palmer is reportedly also attempting to gain clearance for Williams to make his return through the Gold Coast A-Grade competition.

Folau’s teammates incidentally gave the former Wallabies star a reality check when they were blown off the park.

The Tigers are scheduled to play Tugun Seahawks next week but is unclear whether Folau will be taking to the field for his debut.