At first glance, James Graham’s latest musings on concussion were those of a man who had taken one too many head knocks.

In case you missed it, this was Graham’s take when the former Bulldogs and Dragons forward was asked to reflect on the potentially devastating consequences of his chosen profession on Tuesday night. 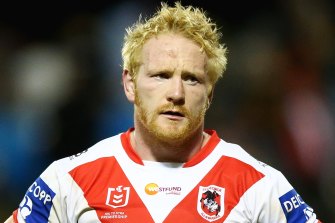 Given the recent concussion concerns regarding a number of players, including Roosters forwards Boyd Cordner and Jake Friend, the question of whether the NRL is doing enough to protect them is timely.

Like Price, Graham has pledged to donate his brain to the Australian Sports Brain Bank. His comments, whether they be misguided or otherwise, have provided another valuable contribution. It has sparked debate about the issue of concussions and the responsibility, and liability, for their management.

Despite repeated blows to the head during his 423-game career in the NRL and Super League, Graham has all of his faculties intact. Will his views change if he begins to display post-concussive symptoms? Will his wife and children share his belief that a premature death was worth it, should it come to that?

Despite Graham’s seemingly blase attitude to his own health, no modern player has done more to educate themselves on brain science and the consequences of concussion. Earlier on Tuesday, leading researchers and concussion clinicians marked Brain Injury Awareness Week with a seminar at Macquarie University titled ‘Family Impacts of Repetitive Head Trauma’. Graham would be aware of their views, which would be as of much concern to him as his comments are to them.

One thing all parties can agree on is that much is unknown about the brain and the effect that repeated concussions have on it. Just before Graham’s controversial television appearance, Dr Chris Levi, a respected neurologist who has treated the likes of Cordner and Tim Glasby after repeated head knocks, praised the NRL’s increasingly conservative approach to the treatment of concussions.

Levi said more could always be done in the area, but also warned of special interest groups “sensationalising risk”, whether they be identities pushing an agenda without all the facts or researchers jockeying for funding.

“Those sorts of pecuniary interests are relevant to the landscape and make the situation more difficult,” Levi said.

Graham will be panned for his views, but at least they have brought the issue to the forefront. Are the risks worth the reward? Could the NRL be doing more to mitigate risk? Is the Greatest Game of All really worth dying for?

“At least we’re talking about it,” said Price, one of the sporting identities discussing the topic as part of Macquarie University’s activities during Brain Awareness Week.

“But we need to do more than just talk about it. We need to act on it.”