Home » Rugby » ‘I’ll keep doing it until they change the rules’: Munster declares he will continue stripping the ball

There is a secret word or sound that makes the Melbourne Storm defence snap to attention.

Whatever that audio cue is, when it comes out of Cameron Munster’s mouth, his fellow defenders instantly peel off a tackle as they know their star playmaker thinks he can strip the ball from the opposing attacker. 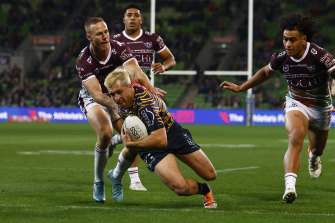 A prime example came during the second half of the Storm’s 28-8 win over Manly Sea Eagles at AAMI Park on Thursday night when Munster’s mouth moved and teammates Justin Olam and Kenny Bromwich instantly removed hands from Manly’s Jorge Taufua, thus allowing Munster to legally go for the steal.

He ripped the ball free, momentarily fumbled it before collecting it and running in for his second try, one that assured his club of the win.

According to statistician David Middleton, Munster has 21 career strips, equal most with Josh Hodgson, although there is only a record of strips dating back to 2001.

Strips were allowed in one-on-one tackles prior to 2019 when players could also attempt to take the ball away if their teammates peeled off and this is where Munster has come into his own, earning the temporary nickname of “Westpac” after he stole the ball three times in a 2019 win.

The Storm are loath to admit what that magic word is.

Storm captain Jesse Bromwich shrugged it off after the Manly game. In defence of the veteran prop, he had coach Craig Bellamy watching him like a hawk as he spoke.

“We are just aware of the style that he plays, he says something, that he has got the ball, and we trust Munster as he has done it plenty of times,” Bromwich said.

Munster tried to play off his pick-pocket skills but he did declare that he would continue exploiting the practice until the NRL changed the rules.

“We have a call for it but I’m not going to [go] into too much detail,” Munster said after the game.

“A lot of teams are playing for it but I’m just lucky that the boys had peeled off.”

As he made that comment, half-back Jahrome Hughes walked past him and playfully impersonated his five-eighth: “Hey, I’m just going to steal the ball off everyone”.

Bromwich praised the ability of Munster to win back possessions for his side, something that has proven potent for the Storm, who already have one of the NRL’s most prolific attacks.

“It comes out of nowhere and the one where he stripped and scored gave us a big boost,” Bromwich said.

“You have to be aware of the players around you and Munster is the kind of player who can pull a play out of anywhere and that is a strength of his. He practices it a lot and we want him to keep doing it.”

But Munster made it clear he isn’t looking for easy targets, rather just taking opportunities as they appear in the heat of a game.

“I don’t watch video on who has got loose carries or anything like that, I just don’t want to make as many tackles as I should be making,” Munster said.

“With the new rule coming in, if you get your hands on the ball, the other players can peel off and I’ll keep going until they change the rules.”

With State of Origin coming up and Munster’s Queensland teammates knowing every possession will be vital, Manly and Maroons star Daly Cherry-Evans hopes his mate’s fast hands can make similar plays during this year’s series.

“He had his fingerprints all over the game tonight,” Cherry-Evans said. “That is a great sign for Queensland.”