Peter Sterling still can’t quite believe that, after 30 years, he will call time on his media career on his own terms.

Sunday’s grand final marks Sterling’s last game as a commentator, with the former Parramatta halfback poised to call time on an illustrious career that has spanned 45 years as a top-flight player and analyst. He will farewell not only the game but a career working alongside close friends including Paul Vautin and Ray Warren.

Sterling hasn’t yet spent much time reflecting on his three decades in the media, but concedes he didn’t expect to enjoy his longevity when he first took up the role alongside Vautin.

“It was an inauspicious start and we were making mistakes left, right and centre,” he said of his early days alongside the former Sea Eagle.

“One of the early games we did, was the infamous Brisbane game where the Walters brothers combined to set up a try for the Broncos.

“Fatty referred to them as ‘the boys from two-head city’. It was a colloquialism, a term of endearment, but there were complaints from the people of Ipswich. Management told him he had to ring the Mayor of Ipswich to apologise, which he did. 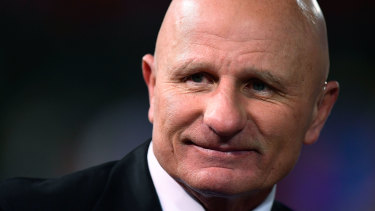 Peter Sterling is poised to retire.Credit:Getty

“After trying to apologise on numerous occasions and being constantly interrupted by the mayor on the other end of the line, he basically hung up with the parting shot ‘Anyway, which head am I talking to?’

“In the same game he was talking about somebody’s defensive efforts, as one player went through another like Epsom Salts. I’d never heard defence described that way.

“A couple of weeks later we were doing a game, I think it was Western Suburbs, where I asked him who the viewers should keep an eye out for. He gave an enormous rap, a five-minute soliloquy on the talents and impact of Billy Dunn.

“At the end of that five minutes, I didn’t have the heart to tell him Billy wasn’t playing in that game.”

Sterling used the tactical nous that made him one of the game’s greatest halfbacks to present the game in a way that all fans understand. The 61-year-old coined the phrase ‘if we freeze play here’, to help explain the action that was unfolding.

“I’ve always been aware of keeping it simple because we don’t want to confuse viewers.

“Freezing it there helps.”

Many expected Sterling to turn his hand to coaching and he admits there are times when he wonders how he would have fared with the clipboard. He says he “came very close” to taking up a head-coaching role, on two separate occasions.

“I actually said ‘yes’ to Bob Millward for the Illawarra job going back many years,” he said. “I got in touch the next day after sleeping on it and changed my mind, I didn’t want to muck them around. I was very close there.

“I was actually offered the inaugural position to coach the Western Reds in Perth. I had a partner over there and spent a lot of time in Perth, I liked the city and lifestyle over there.

“Ron Massey, who I spoke to about it, said if you are going to make the transition into coaching, you’ve got to make sure you do the groundwork and get an education, not to step straight into something like that.

“I’m glad I listened and in retrospect I’ve definitely made the right decision.

“If I had been a coach, I would be divorced. It would have been all-consuming for me. I would have been one of those people who were 24/7 for eleven-and-a-half months per year. I would have had the pen next to the pad, been waking up in the middle of the night to write things down.

“I’m kind of happy that’s an avenue I never pursued.” 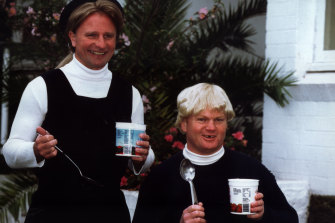 Sterling also has fond memories of his time on The Footy Show, which ran for many years on Thursday nights. The former NSW and Australian halfback was the straight guy and “sidekick” to Vautin in an irreverent take on the game. He chuckles when he recalls moments like the Yoplait anti-ad – “You wouldn’t recognise it as a French accent, but that was as good as I can do” – the infamous chili challenge and a Daredevil Dudes segment when he feared he would be stomped by a brahman bull.

“It’s scary to think now how politically correct we are; half the stuff we did on the Footy Show wouldn’t pass muster now,” he said. “It was different times and we had good fun doing them. That came through, we didn’t take anything or ourselves too seriously.”

Most of all, Sterling will miss the people. He didn’t cross paths with Vautin often during their playing careers, but they clicked immediately on set. During the pre-season Tooheys Challenge, the pair would head to a country area, play a round of golf in the morning, cover a game, squeeze in a second round in the afternoon and then “get on the drink” afterwards.

“Then we would get up and do it again the next day,” Sterling recalled. “And that was work.”

Retirement doesn’t sit well with everybody, but Sterling has no concerns.

“It’s clichéd, but it’s to spend more time with my family,” he said. “It’s to travel as much as possible, I’ll play as much golf as I can. People ask if I’m concerned about retirement and boredom; I don’t get bored, I like my own company. I’m an avid reader, there’s a whole lot of things I’m looking forward to doing that are difficult in the job.”

Sterling recalls one of his first commentary assignments, sitting alongside Steve Roach while covering a schoolboys clash.

“One of the high schools had a front-rower who had the unfortunate nickname of ‘Manure’,” Sterling said.

“At one stage Blocker had ‘Manure steaming onto the ball’. I just thought, this is my environment.

“We all had a passion and love for the game and I hope that shone through.”