Home » Rugby » ‘If anything it’s faster’: No slowdown for Storm star, despite V’landys fears

Melbourne Storm second-rower Felise Kaufusi doesn’t agree that rugby league is being slowed down this season, and if anything, he thinks it is faster.

The Australian and Queensland forward has played rugby league at the highest levels and knows when teams are slowing each other down. He has no doubt this season is every bit as fast as previous ones and hasn’t seen any sign of defences slowing down the play as NRL chairman Peter V’landys claimed earlier this week. 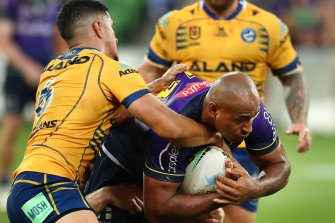 Melbourne Storm’s Felise Kaufusi (centre) says rugby league is as fast as ever, if not faster.Credit:Getty Images

“Not at all. If anything it is faster. I’m out there busting my backside and I still feel like it is very fast,” Kaufusi told The Age and Sydney Morning Herald on Wednesday.

“There are different times where it is faster and times you can rest. I don’t know whatever they are getting that from but to me, it feels like it is just as fast.”

Kaufusi is heading to expansion club the Dolphins at the end of this season, so he is embracing every moment left in purple after 156 games in seven seasons.

“I’m just trying to make the most of every moment and come in here knowing that this is my last year and finish on a high,” Kaufusi said.

“The way I can repay this club for what it has done for me and my family is by doing my best to finish the year on top.

“I’m trying to enjoy all the little moments being around all the lads and the coaches and soak everything up. Even doing things like having my family at the games and trying to get them on the field after the game.

“My kids are starting to understand what I do a bit more fully. My oldest is four, and she just screams and cheers all game.”

Kaufusi admits this season does feel a little different without Dale Finucane, Josh Addo-Carr and Nicho Hynes who had all made their mark on their teammates although Kaufusi enjoyed a few laughs when playing against Addo-Carr in Sunday’s 44-0 win over Canterbury Bulldogs.

“He had a massive imprint on the Storm and I miss having him around, him and his little family,” Kaufusi said.

“We were still having a laugh during the game, I tackled him and asked him, ‘Are you all right’ and he was like, ‘Yeah I’m sweet’.

“So there was a bit of banter in the tackles, but it was weird to see him in different colours. It’s not just me, it’s the whole club that misses him and his energy.”