Lance Franklin has been left bemused by reports suggesting the superstar is contemplating retirement or leaving Sydney for a third club.

Multiples sources have told The Age and the Herald that Franklin is miffed by the speculation surrounding the goalkicking great’s contract talks for the 2023 season. 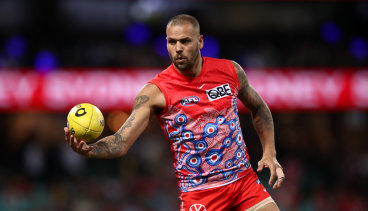 Lance Franklin is in contract talks with Sydney to play in 2023.Credit:Getty Images

Swans chief Tom Harley said the club was not concerned Franklin remained unsigned six weeks out from the end of the home-and-away season, and emphatically denied claims they were stockpiling cash to make a play at Richmond champion Dustin Martin.

Though the Swans are tight-lipped on their offer to Franklin, the veteran will be taking a significant pay cut to play next year. His blockbuster, nine-year, $10 million deal expires at the end of this season.

Harley described the dialogue between player and club as being “respectful with significant amounts of goodwill”. He said the Swans were adamant Franklin would finish his career in the red and the white.

“Absolutely, there’s no doubt about that,” Harley said on SEN. “We think that Lance has been an amazing contributor to the club and the code and has become iconically Sydney and part of the Sydney Swans family, so that’s absolutely our intent for sure.”

The Swans have been linked to Martin, primarily on the basis the Richmond champion spends time away from the spotlight in Sydney, but senior officials have maintained they have not looked into the possibility of a switch. Harley said there was “absolutely no link between these two stories and these two players”.

“I’ve said repeatedly and consistently, as I’ve said with Lance, that we have had no contact nor conversations with Dustin Martin,” Harley said.

“He is not our player, and it would be inappropriate for us to do that. I am a little bewildered as to how the story around Dustin keeps resurfacing and resurfacing with a strong connection to the Swans because that is absolutely not the case.”

Harley would not place a timeline on when an agreement with Franklin would be finalised but a source familiar with the issue was confident a deal would be struck before the end of the season.

Franklin’s manager Adam Finch declined to comment, directing all queries regarding contract talks to the Swans.

One rival list manager said Franklin was an extremely difficult player to value due to his age. The source said forwards capable of kicking 50 goals a season – Franklin has 34 from 14 games – could normally command a deal worth $600,000-$650,000, but he turns 36 in January and does not have other clubs driving up his price.

Former stars Dermott Brereton and Kane Cornes have said Franklin is worth a contract of about $500,000 for 2023.