Home » Rugby » ‘I was like a corpse. I was a shell of myself’: Papenhuyzen opens up on concussion hell

Ryan Papenhuyzen would have been happy suffering any other injury.

“This sounds really bad, but it would have been easier had I injured my shoulder or knee or ankle, just an injury people knew about and when I would actually be back,” Papenhuyzen said. 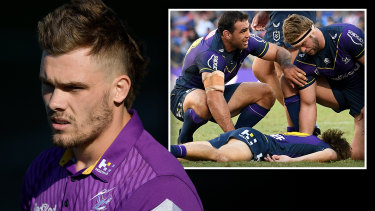 Ryan Papenhuyzen is on the road to recovery after being knocked out during a game on May 16.Credit:NRL Photos, Getty

He was, by his own admission, irritable and rude with his Storm teammates and loved ones, including his partner, professional netballer Kelsey Browne, who flew from Melbourne to the Sunshine Coast to be by his side those first few weeks.

Papenhuyzen had hoped the recovery would be relatively quick. It soon became apparent it was going to be anything but. A few days after the big win over the Dragons he hopped on an exercise bike next to teammate Ryley Jacks, who had also suffered a head knock that same weekend in Brisbane.

“They set up two bikes alongside each other,” Papenhuyzen said. “Ryley and I cruised for about 20 minutes when I turned to him and said, ‘I’m cooked. How are you?’ He said he was fine. That’s when I realised concussions are not all the same.”

There was no memory loss for Papenhuyzen, but the days that followed were probably the worst he has experienced in his life. 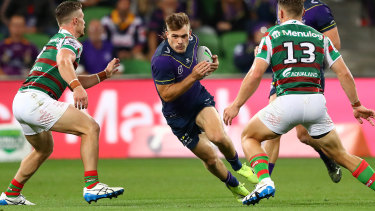 At his best, Ryan Papenhuyzen is one of the most potent attacking players in the game.Credit:Getty

“Kelsey came up that day I was on the bike with Ryley and all I could do afterwards was lay in bed,” he said. “I was like a corpse. I was a shell of myself. I couldn’t really speak to her.

“I wanted to speak to Kelsey, I wanted to speak with people about what I was going through, but I didn’t, and I actually couldn’t have cared less. I was rude. I was irritable. I just wasn’t motivated to do anything. That was the frustrating thing.

“In the back of my mind I thought it would only last a week or two. It’s been seven weeks now.

“The headaches still come and go, but they’re different to the ones I felt when I was first concussed and wasn’t feeling like myself.”

“I was like a corpse. I was a shell of myself. I wanted to speak to Kelsey, I wanted to speak with people about what I was going through, but I didn’t … I was rude. I was irritable. I just wasn’t motivated to do anything.”

Papenhuyzen has studied a lot about concussion. It was impossible to escape all the talk about head knocks and high contact crackdowns, not to mention the forced retirements of Sydney Roosters legends Boyd Cordner and Jake Friend following their own battles with concussion.

But not once has Papenhuyzen considered that he might be forced out of the game. He is only 23.

After conducting his own extensive research into concussion and chronic traumatic encephalopathy (CTE) he is confident he can make a full recovery.

Papenhuyzen said there is a lot of misunderstanding when it comes to brain injuries. The brain, like a knee or any other body part, can actually recover with the right treatment, he said.

“And just because you get a head knock doesn’t mean you will get CTE,” Papenhuyzen said. “Another argument people never mention is how the effects of drugs and alcohol can also lead to CTE.”

Papenhuyzen and Storm medical staff reached out to doctors and neuropsychologists at the University of Sunshine Coast in the wake of the head knock. He was sent an extensive amount of research on concussion and given a workout regime.

“Doing nothing was the worst thing for me,” he said.

He started to ride an exercise bike for just 20 minutes and had to stop whenever his heart reached 120 beats a minute. He would record how bad his symptoms felt on a scale of one to 10, with a four or anything higher requiring him to stop. He rode twice a day. When the symptoms remained manageable, he gradually increased his heart rate.

Papenhuyzen spoke several times with Roosters playmaker Luke Keary about his own concussion symptoms and contacted a former player, Hayden Grainger, who had posted several blogs and videos about his own recovery, to the point he was now “completely symptom free”.

One breakthrough for Papenhuyzen was realising his neck caused a lot of his headaches. The tackle caused a whiplash. Since he had started to strengthen the muscles around his neck, the headaches have improved.

Papenhuyzen was diplomatic when asked about his feelings about the Fuimaono tackle. The Dragons player received a five-match ban for the hit.

“You understand things like that can happen when you take the field, but it’s not a good look for those at home watching, especially if you want to grow the game,” Papenhuyzen said. “It’s a matter of working out which ones are incidental.”

Putting his head in danger will be a psychological challenge for Papenhuyzen when he resumes contact training, which is likely to be this week. The Storm have won 13 games in a row and there is no pressure internally on the fullback to rush back.

Papenhuyzen doesn’t know when he will be back, but he’s confident he will. Then opposition teams can live with the headaches.