Home » Rugby » ‘I know he can stand up’: Eels back Moses to shine on Origin stage

Parramatta players have defended Mitchell Moses ahead of his Origin debut on Wednesday as doubts continue to be raised about the halfback’s ability to stand up in big moments.

Moses came under fire for missing a penalty goal for the Eels in last year’s semi-final, with NRL legend Phil Gould coming last week labelling the rookie halfback a “grower and a shrinker”.

“He grows when things are going good and he shrinks and gets away from the game when things aren’t going the way that they’re planned,” Gould said on The Sunday Footy Show.

On Origin eve, Reed Mahoney defended Moses against the criticism and said, despite being a Queenslander himself, Moses has the ability to get the job done.

“People can say that about him, but he’s played finals many times before, and there is more than one player on a football team,” Mahoney said. 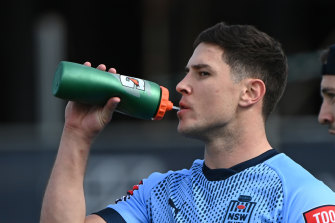 Mitchell Moses has replaced Nathan Cleary in the no.7 jersey for game three as the Panthers star battles a shoulder injury.Credit:NRL Photos

This week, Blues skipper James Tedesco spoke about his close bond with Moses and said he would work to settle his nerves in camp this week. The duo have formed a close bond since their time at Concord four seasons ago.

Eels star Dylan Brown said Moses will be confident in his role.

“It is a big thing, State of Origin. Freddy has picked him for a reason as he believes he can get the win and contribute to putting in a good win for NSW,” Brown said. “He does some amazing things on the field. We are backing him 100 per cent.”

Moses’ selection is a bittersweet moment for Mahoney, who was ejected from the Maroons camp after Harry Grant made an early return from a hamstring injury.

Mahoney will return for round 18 from a month off having dislocated his shoulder against the Knights shortly after being released from Origin camp.

The star No.9 said both the injury and having his Origin dreams shattered have made him hungrier than ever.

“There’s no point kicking stones, you’ve just got to keep moving forward,” he said about his short time with the Queensland side.

“I’ve accepted it and now I’m just even more hungry now to perform for my team. It was disappointing but there is plenty of time for that.”

Mahoney will play on Friday against the Titans with his shoulder strapped and said surgery was out of the question.

Both Junior Paulo and Moses have been named to back up after Origin III, but with just a two-day turnaround the chances of the duo playing are unlikely. If Moses is unable to back up, Jakob Arthur will once again step in as halfback.

The Eels are coming off a bye and will also be boosted the return of back-rower Isaiah Papali’i after suffering a head knock against the Panthers in round 16.