It's surprisingly hard to door-knock the Jehovah's Witnesses.

For a religion that spreads its word door-knocking houses, I thought they'd understand the gesture. But when I went to find Alex Rance's Kingdom Hall church group, I discovered the Jehovah's Witnesses have automatic security gates that prevent you getting to the actual door.

I'd hoped to meet his elder or spiritual leader so that they could shed some light on the champion Richmond footballer's decision to retire in the prime of his career, a call Tiger fans still find hard to comprehend. 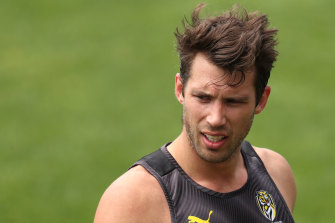 I wanted to understand what it was in the teachings of his religion that made Rance cite it as one of the factors, along with family, in his decision to walk away from the game.

Were there specific parts of his faith that spoke to a conflict between elite competitive sport and religion?

Rance, a premiership player and one of the great defenders of his generation, also said at the time of his sudden retirement in December that he was prioritising family over football, which was a heroic decision, if somewhat surprising from someone in an occupation that can have fewer contact hours at the club per week than a university student.

I was contacted by David Eades, also from the church. He offered to come to my house. I declined. We met at a cafe.

On the Friday that I went to the St Kilda branch of the Jehovah's Witnesses there was an intercom but no one on the other end of it. They have a good handle on security – and irony.

I was witness to three cars in the car park but no Witnesses to talk to. Denied but not deterred, I abandoned the streets and returned home to the telephone.

Success. Matt at the Australian branch office in Sydney was polite, eager and understanding when I explained my request. I was surprised, as the metal gates at the Kingdom Hall hadn't screamed 'welcome'.

He was enthusiastic about the prospect of discussing theology with The Age and specifically the religious precepts for why an athletically gifted man should stop playing full-back for Richmond.

Days later I was contacted by David Eades, also from the church, and he was pleased to meet and talk. He offered to come to my house. I declined. We met at a cafe.

First, he made clear, he did not know Rance personally and was not talking specifically of his situation but rather of anyone facing a similar situation.

Secondly, and importantly to me at least, he liked footy, so he could understand the magnitude in this city of what Rance had done and why there was interest in knowing what the church thought about it all.

Firstly, he said the church did not ask Rance to give away football. The church, he said, does not do that. If Rance found football getting in the way of his faith – and his family – then it was up to him to decide what should happen next. However, they would counsel him as a Jehovah that faith comes first.

But was there anything in the religion that would create a conflict with elite-level sport? After all Serena and Venus Williams were raised Jehovah's Witnesses and it hasn't stopped them playing tennis, so why should it stop Rance?

No, there wasn't, Eades said. And the Williams sisters were evidence of that point.

Rance's situation was personal, as was his decision. He felt the conflict in his dual roles as sportsman and churchgoer and the church helped him resolve that conflict.

Playing into Rance's decision was his desire to do more for the church. He was out door-knocking in the bayside suburbs of Melbourne earlier this year and even startled an AFL player when he knocked on his door holding a copy of the Watchtower magazine.

"It's all personal choice, it truly is, because otherwise that would put us in some sort of God-like position to be telling him what to do," Eades told The Age.

In the end it was Rance's decision, which does not mean that this is the end; while his retirement was a surprise, a comeback to football would not be.