Home » Hurley on the mend, but no timeline for an Essendon return

Essendon are putting no pressure on Michael Hurley to return to play as he continues to recover from a nasty infection that left him hospitalised in the pre-season. 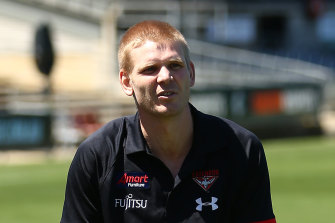 Essendon’s Michael Hurley is recovering from an infection after a hip procedure.Credit:Getty Images

The veteran Bomber picked up the infection after having a procedure on his hip and was gaunt and walking with the aid of crutches when he appeared to watch a Bombers’ practice match two months ago.

Since then he has been improving, with the Bombers happy for him to progress at his own rate, keeping the carrot of him playing at some stage in 2021 ahead of him.

Bombers coach Ben Rutten said on Friday, ahead of the Anzac Day clash with Collingwood on Sunday, that the club was only concerned about the 30-year-old’s wellbeing and making sure his health returned to what it was before the infection.

“He’s continually getting better and that is what we’re after, seeing progress and moving much more freely, doing more exercises and building up his strength,” Rutten said.

“It’s about getting him healthy.″⁣

The Giants’ Sam Taylor revealed during the week that he had been in contact with Hurley after suffering a similarly debilitating infection last year, which knocked him for six and kept him out of football from the middle of June last season.

Rutten also indicated that the Bombers would include ruckman Andrew Phillips to play against Collingwood’s Brodie Grundy on Anzac Day.