Home » Rugby » ‘He’s not going to yell at you’: Smith opens up on his hard conversation with Bellamy

The 24-year-old utility was soaking up time at home with his family on Waiheke Island, across the water from Auckland, where he was rejoicing in the Storm’s 2020 triumph.

His first big call was to award his premiership ring to his mother Tirohia.

“Mum was a bit emotional. More so, it was special for me to let my parents know they raised a kid who had a dream and made his dream come true,” Smith said. “I’m a little emotional just saying it.” 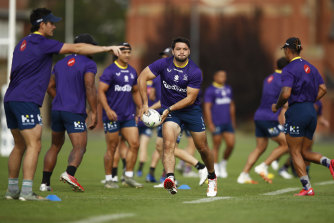 Brandon Smith looks to get the ball away during Melbourne Storm training at Geelong Grammar on Friday.Credit:Getty Images

As his thoughts looked towards 2021 and beyond, Smith decided he needed to be upfront about his aspirations to be a starting NRL hooker, so he made his second big call, reaching out to coach Craig Bellamy who he claims was ‘sunbathing’ in Queensland.

The Storm still don’t know who will start at hooker, with Smith and Queensland origin player Harry Grant vying for the role.

No one at the club knows what Cameron Smith will be doing in 2021 but they are preparing as if he will not be playing with the club.

“He is one of those coaches you can have hard conversations with and not worry about what he will do. He’s not going to yell at you,” Brandon Smith said of Bellamy.

“That’s why he is who he is. All us boys respect him and he respects us.

“I just told him how I felt, he respected my decision. But, at the same time, his job is to put the best side out there to win him a premiership.

“Me and him didn’t see the point in me getting a release this year when the number nine spot is up for grabs. He said he wasn’t going to just give the number nine jersey to Harry Grant or just give it to me. We have to go out there and take it.”

The club has allowed Smith’s management to look at potential clubs for 2022, although he said he hadn’t spoken to any teams yet as he wanted to focus on chasing another title.

“If I can’t be a nine at this club, I’d love to play it elsewhere,” Smith said.

“I want to be a long-term number nine, I want to play number nine for my country and do great things like Cameron Smith has done.”

The issue for Smith is he has to bulk up to 97 or 98 kilograms to play as a utility forward, whereas he prefers to play hooker at 92-93kg so he is lighter on his feet. 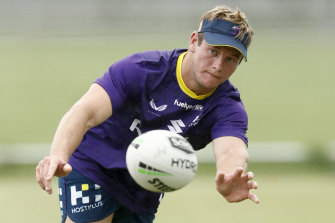 Harry Grant is vying with Brandon Smith for the hooking role should Cameron Smith not return.Credit:Getty Images

If Grant wins the hooker role, Smith will happily play out the year in a support role but he added neither he nor Grant could be assured of their futures if Cameron Smith made the unexpected decision to play on.

“I think it changes a lot of people’s futures at the club, not just mine but Harry’s as well,” Brandon said.

“It’s looking like he is not coming back but we don’t have a clue what is going on. It’s up to him, he deserves to choose whether he wants to leave the game or not.”

The hooker role is demanding as playmaking duties are added to the heavy tackling requirements and while both Grant and Smith are chasing the starting role, they could end up sharing the 80 minutes at hooker.

“We have only been back a week and a half. Everything is up in the air,” Smith said on Friday.

“I don’t know about playing 80 minutes right now but that’s why we have 49 days until round one.

“I’ll be in good shape to try and produce an 80-minute performance but if not I’m fine sharing the field with Harry as we can do some great things together. We are sort of like the ‘dynamic duo’, that’s what we like to call each other.”

Smith and Grant may be fighting for a spot but they remain good mates and were spotted playing pool on Friday afternoon at the Storm’s training camp in Geelong.

“We are fighting for the same position but we feed off each other and learn off each other,” Smith said. “It’s only a positive for us.″⁣