Parramatta coach Brad Arthur tries to avoid getting involved in Origin selection debates, but could not help himself when it came to Queensland hopeful Reed Mahoney.

“Reed has some healthy competition from that kid in Melbourne [Harry Grant], but I tell you what he wouldn’t do – he wouldn’t let Queensland down,” Arthur said. 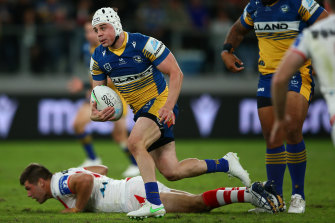 The Eels hooker has stripped nearly five kilos and found it easier coping with the ruck speed.Credit:Getty Images

At the same time that the Roosters dummy-half stocks have thinned due to the retirement of Jake Friend, an arm injury for Freddy Lussick and Sam Verrills undergoing eye surgery this week for a semi-detached retina, Mahoney’s form has put him in the Maroons’ selection debate.

Grant is the Queensland incumbent and did an excellent job in the Origin decider last November, but Mahoney is pushing hard to be included as their back-up.

Mahoney presents a hard exterior on the field, but has this year started laser hair removal on his legs and buttocks, as well as fake tanning. He was also contemplating cosmetic surgery on his “cauliflower ears” at the end of the year.

Kangaroos coach Mal Meninga is a huge fan of Mahoney, while NSW and Kangaroos No. 9 Damien Cook told the Herald last week: “Reed is in career-best form and will be asking the question of selectors up there as well”.

Mahoney, who lost nearly five kilos over the summer to help cope with the quicker game, said he would not disappoint his state if included in their squad.

“I guess it’s a kid’s dream, and just to be in that conversation is great,” Mahoney said. “I’ve worked extremely hard to put myself in the No. 9 jersey at Parra. While Queensland selection isn’t in my control, what is in my control is playing good footy and winning games for Parra. If I’m there I’m there.

“I haven’t spoken to anyone and I don’t expect to. I do know everyone grows another leg when you play Origin. I like to do the tough stuff, and I feel I wouldn’t be out of place.”

After completing rehabilitation on a broken foot on his own during the COVID-enforced NRL shutdown this time last year, Mahoney held his own for the Eels, but spoke with Arthur about being more creative out of dummy-half.

“Brad is honest with me and believes in me, and I spoke to him about wanting to be more creative out of hooker,” he said.

Arthur added: “He’s starting to get a better feel for when to run and when not to run. He’s only played just over 50 games, it takes a while for them to work out what works for them. But Reedy has kept his game pretty simple and he’s in a good spot with his preparation.”

The Eels had four players involved with the extended Blues squad last year, and their involvement, Arthur said, helped with their leadership once they returned.