The only thing that could have topped Tom Freebairn’s long-awaited NRL debut was if his good mate Jackson Hastings was playing alongside him.

Freebairn and Hastings have known each other since they were six years old, played with and against each other on the south coast, and even attended the same high school. 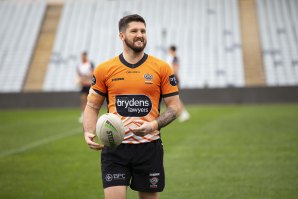 Which is why there was a bit of a heavy heart for Freebairn, whose maiden NRL start on Sunday comes at the expense of his dear friend Hastings.

Had Hastings not snapped his fibula in a shocking hip-drop tackle last Saturday and undergone surgery, Freebairn knows he may have been waiting a little longer to feature in the top flight.

Hastings posted a special message on Twitter from his hospital bed when he learned this week Freebairn, a 27-year-old lock, would debut for the Tigers against Newcastle. “Proud of this bloke. Went to school together, played junior rep footy together now get to see his hard work pay off and realise a dream. Great story about never giving up! Go well Tommy.”

“Jacko has given me plenty of support over the years and helped guide me, even though he is a little younger than me,” Freebairn told the Herald.

“He played with Wests Illawarra, I played with the Dapto Canaries. We played a lot of school footy together at Illawarra Sports, he was the halfback and fullback, and I was the one who followed him around and did what he said.

“Obviously I’d love to be rubbing shoulders with him and making tackles with him this weekend. But knowing Jacko and what he’s like with his work ethic, he’ll come back bigger and better and hopefully I get to play another game with him.”

Freebairn spent four years with North Sydney, including a pre-season with the Bears’ NRL partners the Sydney Roosters, and a cameo for the tricolours at the Perth Nines.

He later followed coach Ben Gardiner across to Wests where he had worked hard the past couple of seasons.

A proud Indigenous man, Freebairn works as a full-time Aboriginal education officer at Dorcheter Educational and Training Unit, which is based inside the Reiby Juvenile Justice Centre, just a stone’s throw from Campbelltown Sports Stadium where his dream will be realised around 4.05pm this weekend.

“I’ve done it for about five years, and the best thing about my job is the people I work with need to be special people and understanding and resilient,” Freebairn said. 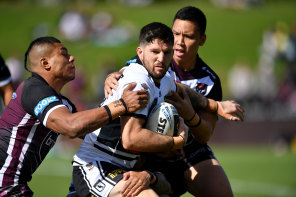 Tom Freebairn in action for Wests in NSW Cup.Credit:NRL Photos

“The students, obviously they have made some terrible decisions in their life, but they’ve flipped it around and going to school there and making better choices for themselves and their siblings and family coming through.

“Work has been unbelievably flexible. But in the ‘juvie’, no matter who I play for, the kids think every team is rubbish. I can’t pick a good team. They always tell me I’m no good. It’s all part of the banter and rapport you build with the young boys and girls.”

Freebairn questioned if his time had passed to play first grade, but was grateful his large support network urged him to not give up. It was extra tough in 2020 when COVID put a stop to the reserve-grade competition. He remembered coach Jason Taylor setting out mental challenges for his players, including learning how to juggle, just so Freebairn and his teammates remained mentally stimulated.

Named on the interchange for the Tigers, Freebairn said lock was his best position, “but I tell every coach I play for I’ll play anywhere for them”.

Meanwhile, Tigers chief Tim Sheens was quick to shoot down whispers Luke Brooks could be part of a swap deal with David Klemmer to the Knights. Brooks has been a long-time target of the Knights, and the halfback and Klemmer are both on big money.

“There has been no approach, nor are we interested in a front-rower,” Sheens said.