Des Hasler could be headed to the courtroom with the Manly Sea Eagles over the rainbow jersey fiasco that derailed the club’s season, as the embattled coach’s preferred successor expressed concerns over the instability at Brookvale.

Sources with knowledge of the situation confirmed to the Herald that Hasler is considering a $1m-plus lawsuit against the Sea Eagles for allegedly compromising his ability to fulfil his contractual obligations.

Under the terms of Hasler’s contract, a top-six finish in the NRL in 2022 would have guaranteed him a contract extension for the 2024 season.

Hasler, if he proceeds with legal proceedings against the Sea Eagles, will argue that Manly’s decision to launch a ‘pride’ jersey without the consent or blessing of the players and football department impeded his ability to reach the key performance indicators of his employment.

Manly were sitting in ninth position on the NRL ladder when the rainbow jersey fiasco derailed their season. They had seven players make themselves unavailable for selection for the ensuing round against the Sydney Roosters.

The Sea Eagles lost that game and lost the remaining five games of the season thereafter, finishing the competition in 11th position. The coach’s future is now under the spotlight as a result. 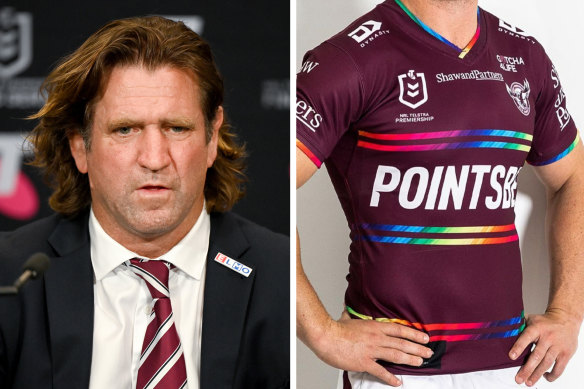 At the time of the jersey launch, Hasler slammed the management of the club.

Since the end of the season, Hasler has been angling for a contract extension for an additional year beyond 2023. As part of those discussions, the parties have discussed a succession plan.

Hasler has anointed Cronulla assistant Josh Hannay as his preferred successor, although the Herald revealed the club has a strong opinion of former Rabbitohs and Broncos mentor Anthony Seibold.

Hannay has held meetings with Hasler and Sea Eagles officials, who are poised to make a call on who will replace Canterbury-bound assistant Chad Randall with a view to eventually take over from Hasler. Should tensions between Hasler and the club hierarchy result in the 61-year-old’s departure, then Hannay or Seibold will be in the frame to take over immediately. 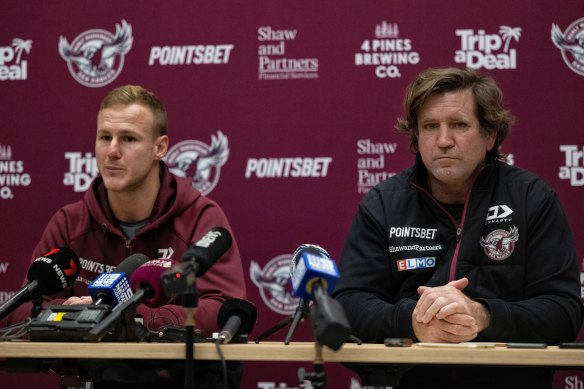 Hasler fronts a press conference with captain Daly Cherry-Evans after the launch of the rainbow jersey.Credit:Sydney Morning Herald

Speaking for the first time about his interest in the role, Hannay said he was flattered with Hasler’s endorsement, but would have to weigh up if Manly was the right fit given the dramas on the northern beaches.

“I’ve got no doubt I’m ready [to be a head coach] and I say that with all due respect to the position,” Hannay told the Herald.

“I don’t underestimate the challenge of being a head coach, I’ve had a taste of it with my interim roles. I feel I’m a well-rounded coach and I’m certainly ready for that opportunity.

“At the same token I’m not desperate, I won’t just jump at the first opportunity that comes along. I want to make sure the fit feels right because I couldn’t be happier with where I’m at with Cronulla. I’d be loath to leave the good situation I’m currently in to jump into something that’s potentially unstable.”

Asked if he felt the Manly coaching job was a poisoned chalice, Hannay said: “They are the things you have to weigh up if you’re in my position, absolutely. There’s plenty of noise around Manly at the moment. They are the things that weigh on your mind as you’re making these decisions; what are you actually walking into?

“Certainly, that’s been discussed between myself and Des and the club. They are absolutely the things you need to think about whenever you step into such a role.

“There’s a lot of negativity around them at the moment, but you can’t deny the talent that exists in that roster. A lot of it was sitting on the sidelines at different times this year.

“While there is a bit of negativity around that club at the moment, it was only 12 months ago they were a top-four side and had arguably the best player in the game [Tom Trbojevic] at fullback.

“I know for them over there there are some negative headlines, but if you look at the roster, there’s also certainly plenty to like about the job and the club.

“That’s all part of the process, weighing up the pros and cons and making sure everything is on the table.”